I'm Luffy! The Man Who Will Become the Pirate King!(debut)

Roronoa Zoro, also known as "Pirate Hunter" Zoro, is a pirate and a former bounty hunter.

He was the first member to join the Straw Hat Pirates, and, to date, is considered the largest threat and most dangerous member in the crew after Luffy. His fame as a master swordsman and his great strength, along with the actions of his captain, sometimes led others to believe he was the true captain of the crew.

He is one of the top three fighters in the crew alongside Luffy and Sanji, and his dream is to become the greatest swordsman in the world. Zoro is also regarded as one of twelve pirates who are referred to as the "Worst Generation" (formerly known as the "Eleven Supernovas"). He currently has a bounty of 320,000,000.

Zoro usually maintains a very stern, serious, and distanced personality, but often loses his temper in a goofy and exaggerated comical style. It would seem however, that this anger is the only emotion that Zoro often feels comfortable showing. Outside of situations where he feels confident in battle, he tends to smile or laugh the least out of the Straw Hats and rarely fools around with the rest of the crew. In fact, his defeat at the hands of Mihawk and subsequent vow to Luffy is the only time since his friend Kuina passed that Zoro has been seen crying in the series. He is shown to be very lazy because he is often seen taking a nap. He would often bicker with Sanji, as the two had a strong rivalry since Arlong Park.

Zoro is an average sized, muscular young man with lightly tanned skin. He always carries around his three swords, bundled up with a green haramaki over his right hip, allowing him to easily draw them with his left hand. Although his right hand is usually seen resting over them, he can also use this hand to pull his swords out before sitting down. He has three identical gold earrings on his left earlobe. Zoro normally keeps a black bandanna tied around his left bicep and ties it around his head when he is fighting seriously against an opponent.

Zoro's body is covered with scars from his many battles, most notably the massive scar stretching from his left shoulder to his right hip that he acquired during his loss against the world's greatest swordsman, Dracule Mihawk, at Baratie. His other notable scars are the scars he inflicted upon his ankles in a desperate attempt to free himself from Mr. 3's Giant Candle Service Set by trying to cut his feet off at Little Garden.

Zoro's other remarkable feature is his cropped green hair, which Sanji often teases him about by calling him "moss-head" due to its resemblance to a "marimo".

Similar to most of his male crewmates, Zoro has the same outfit throughout most of the series. He consistently wears black trousers tucked inside black boots, a plain white shirt with three undone buttons at the collar and his green haramaki. However, only Zoro's shirt varies from time to time in the arcs.

During and after the two-year timeskip, Zoro gains a new scar running down his left eye, which is now implied to be critically injured as it is always closed. His neck appears to be much thicker, he is more muscular and his hair is now a little longer, now slightly slicked back. Zoro now wears a long, open dark-green coat closed on his waist and is held by a red sash, in which his three swords are now tucked into, and his black bandanna is tied around his left forearm. His coat exposes his bare chest, revealing his green haramaki underneath the coat. He also appears to have grown taller, as he seems to be almost as tall as Robin when standing next to her.

Road to the Omniverse Edit

In Road to the Omniverse, Zoro wears an outfit similar to his Arlong Park outfit. He wears a green unbuttoned Hawaiian shirt with a red thunderbolt pattern on it. His shirt is the same color scheme as his robe and sash from his Post-Timeskip outfit. He wears his black bandana around his left wrist, as well as keeping the green haramaki, black trousers, and black boots from his primary outfit. He also wears a brown backpack, which carries his swords.

In the Virtual Paradise, Zoro wears a dark green sleeveless hoodie with red trim, his green haramaki underneath, and the same black trousers and boots from his primary outfit. Also, his black bandana is tied around his left wrist.

In the flashback featured in "What's Changed in Westwood? Battle of the Rivaling Islands!", Zoro was seen wearing a dark green short-sleeved tunic underneath a beige chestplate with gold and brown straps, a brown belt with 4 brown and beige strips of leather attached to it, and the same black trousers and boots from his primary outfit. He also keeps his trademark green haramaki, but it’s not visible, as it’s being covered by his tunic.

During the Akatsuki Revival Arc, Zoro wore an unzipped, grayish-navy blue collared shirt with short sleeves and a mesh shirt underneath it. A shiruken holster is attached to his black trousers, and his boots are replaced by sandals.

During the Cipher's Law Arc, Zoro wore a zipped-up, khaki fishing vest with 8 pockets and a silver zipper, as well as a dark green scarf around his neck. He retains his green haramaki, black trousers, and black boots.

On Easter, Zoro wore a baby blue short-sleeved polo shirt with light yellow and orange stripes, along with his green haramaki, black trousers, and black boots.

During the Post-Cipher's Law Arc, Zoro wore a black tank-top with "GRETA VAN FLEET" written on it in white, as well as his green haramaki, black trousers, and black boots.

During the Let's Go, Baldi! Arc, Zoro wore a green and white hooded jacket with a gray hood, a black zipper, and elbow-length sleeves, as well as his green haramaki, black trousers, and black boots.

During the Race Against TIme Arc, Zoro wears a short-sleeved, bluish-violet button-up shirt with a black collar and buttons, as well as a black and gray T-shaped patch on each side of his chest. Underneath the shirt, he wears a long-sleeved, gray and black striped shirt. He also wears his green haramaki, black trousers, and black boots.

During the Revolution Arc, which is the final Story Arc of Heroes United, Zoro wears 3 different outfits, and with each one, he sported his green haramaki, black trousers, and black boots.

In the Dog-Daze of Summer series, Zoro’s primary outfit consists of a white tank-top underneath an unbuttoned, green and white vertically-striped shirt with short sleeves. He also retains his green haramaki, black trousers, and black boots.

In Season 1 of the Senior Year series, Zoro was seen wearing his white and green yukata from Wano Country. In Season 4, Zoro wears a dark green hooded coat with chest pockets, two black stripes on the chest and sleeves, and forest-green fur on the hood and hem, along with his usual haramki, trousers, and boots. Underneath his coat, he wears a gray short-sleeved polo shirt with a green collar and stripes. In Season 9, Zoro wears a pale-green t-shirt with slightly torn sleeves underneath a dark-brown cargo vest with dark green trim and 4 pockets, as well as his usual haramki, trousers, and boots.

Zoro and the Straw Hats were sailing through the ocean, when they were suddenly attacked by the marines. They captured Robin, Franky, and Brook, leaving Luffy, Usopp, Chopper, Zoro, Nami, and Sanji remaining. A big wave came and hit the group of six. Nami, Zoro, and Sanji find themselves in Quohag, where they meet the Griffins, but they were kicked out of their house for mentioning Brian(who has been kicked out of their house a few weeks prior). After helping Stewie get Brian back in the house, The group of 3 head to Milford, where they reunite with Luffy, Usopp, and Chopper. They have been spending the holidays with the Connellys before parting ways.

Zoro had his memory erased by Eon and was sent to an alternate timeline where he, along with the rest of the crew, had never joined Luffy's crew, and instead joined the marines. Luffy and his group visit said timeline and his memory was recovered after Sanji punched him in the face, causing him to remember their rivalry. After recovering the other crew-members' memories, they all escape while battling with Tord. Upon escaping, Zoro helps the gang take down Eon before parting ways.

The crew is approaching  a pair of rivaling Islands named Dattco and Wyndham, who make those who pass them choose an Island to stay on temporarily, or be killed on sight. They have to choose an island before it’s too late. Unfortunately, the crew is disagreeing over the matter Zoro, along with Usopp and Brook wants to go to Dattco, while Sanji, Chopper, and Franky want to go to Wyndham. As they approach the islands, Luffy makes his decision. If he chose Dattco, Zoro will be happy with his decision. If he chose Wyndham, Zoro will despise Luffy and call him a traitor. Zoro then goes to the island he chose, along with the other crew members. He later appears in a couple flashbacks of HU008 and HU019. Zoro has spent the entirety of Season 44 in Dattco, before being rescued by Luffy and his group and making amends with the other crew members the following season. He has been helping the gang rescue their other friends and going on adventures with them ever since. After spending the summer with the Connellys, Zoro, along with the rest of the heroes, departs from Franklin and heads home.

In the Senior Year series, Zoro was briefly present during a Skype chat in "Time Rupture 3: Road to Wampanoag", and then made a flashback appearance in the episode "Maleficent: The Enemy Within". He later made his first physical appearance in the Season 51 episode "Critters", where he visits the Connellys for the weekend, and later helps Randy and the South Park boys rescue Sharon and Shelley from the hands of the Woodland Critters. Zoro made another flashback appearance in "Injustice in Colorado". In Season 56, With the Coronavirus at its worst, The Straw Hats are now in quarantine. In "Oops, My Timeline Crashed", Zoro and Usopp go out on a supply run for one of Chopper's potential cures, and once they return, the cure failed to work, and shortly after, they both got the virus, and while the rest of the crew left to rescue Alex, Zoro and Usopp remained in Wano Country under the care of presumably the non-infected residents. 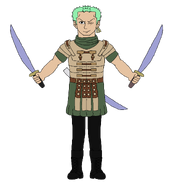 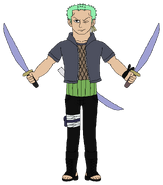 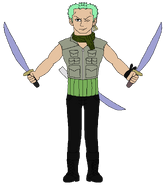 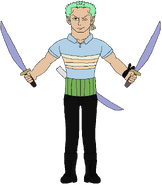 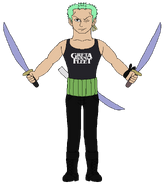 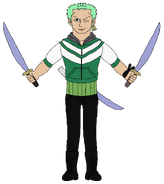 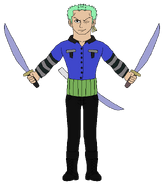 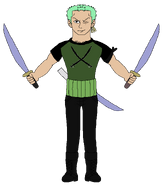 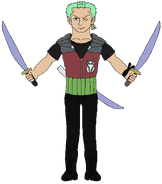 Add a photo to this gallery
Retrieved from "https://school-daze.fandom.com/wiki/Zoro?oldid=7837"
Community content is available under CC-BY-SA unless otherwise noted.