William James Fredrickson, is the tritagonist in the show School Daze. He is the funny one. He’s always grounding his classmates for fun. He used to be a platypus, but in “Return of Willy”, he revealed that his platypus self was just a robot that malfunctioned. In earlier episodes, he used to die a lot, just like Kenny from South Park, but the gag ended after Season 15. In “Willy’s Inside Story”, It is revealed that he’s related to Kenny. He appears in almost every episode.

Willy has a low IQ, he is mostly known for his grounding jokes, Bagel Song, clever nicknames, his various catchphrases, his overall sense of humor, and always wearing a hoodie. Willy enjoys telling jokes or joking around with his fellow classmates, and appreciates the fame he receives from it and gets annoyed when someone uses their jokes against him. Willy's jokes are popular with most students, but some people take offense to them, to which he rarely shows sympathy. He used to die in every episode, but the gag ended after Season 15. In his debut, He was a platypus that was allergic to bread. When Patrick gave him bread, he had an allergic reaction and went into a coma, which resulted in Patrick getting in trouble with the police. He went to school with Tom and Patrick for a while, until his sudden disappearance in South Park: The Metal of Trust. Then, in Quest to get an Xbox, Future Patrick reveals that he passed away in February. He returns in the School Daze episode “Return of Willy”. In the episode, he reveals that his platypus self was just a robot he built that malfunctioned. It was also revealed that he lied about being allergic to bread. He used to chase Tom and Trent’s bus at the end of every episode, until Alex got him arrested in The School Daze Christmas Movie. He’s been going to school with Tom and Trent ever since. In the High School Years Series, Willy is shown to act violent towards other students, such as Nathan or Andrew, who mock him for his hair, beard, and habits for walking on his toes. He most likely got his violent behavior from Trent.

Willy has fair skin, blue eyes, and blonde, spiky hair. According to Nathan, he has a beard, which isn't visible in the series. He is often shown walking on his toes. He wears 5 outfits throughout the series. He is always seen wearing a hoodie.

When he first appeared, He was a talking Platypus. He had teal fur with an orange beak, tail, and feet. He also wore a brownish-purple T-shirt. He looked very similar to Perry the Platypus. This is how he looked until his disappearance in South Park: The Metal of Trust. As a child, his shirt had white stripes.

In the Original Series, he wore a light blue hoodie with red laces, his brown shirt underneath, green pants, and blue sneakers. He wore this until he was gunned down by Patrick in "Quest to Kill Willy".

In the Adventure Sponge series, he got a new look, he had dark blue skin due to being exposed to a dangerous chemical. He wore a Steve head, which was duct taped after it was destroyed in “Seamus & Joe’s 3: The Big Freeze”. He wore a torn-up purple T-shirt, khaki pants, which were also torn-up, and matching shoes.

In the Adventures in South Park series, his look changed again. He got his tan skin back, but his hair was brown instead of blonde. He wore a red hoodie, white undershirt, khaki pants, and white sneakers.

In the 8th Grade Adventures, High School Years, and the Forever Sophomores series, his look changed once again. He now has blonde hair and wears a lavender hoodie, a teal short-sleeved undershirt, khaki pants, and blue sneakers.

In Advanced Education, Willy wears a green and red hooded jacket with dark green laces and a silver zipper, a blue short-sleeved undershirt with a burrito on it, a dark red digital wristwatch on his left wrist, brown cargo pants with 4 pockets, and a new pair of orange and white high-top sneakers with orange Nike symbols.

In the Dog-Daze of Summer series, Willy wears a summer-themed variation of his Seasons 11-37 attire, consisting of a lavender short-sleeved hoodie with his teal undershirt and khaki shorts. On his feet, he wears white socks and sneakers that are similar to the ones he wore in Advanced Education, but the orange parts of his sneakers are changed to blue. He also keeps his red wristwatch from the Advanced Education series.

In Seasons 1-7 of the Senior Year series, Willy wears a short-sleeved teal Platypus-themed hooded jacket with orange trim, a beak & eyes attached to the hood, and a tail on the back. Underneath it, he wears a lavender mock-turtleneck shirt with rolled up sleeves and two red and green horizontal stripes in the middle. He keeps his watch and brown cargo pants from Advanced Education, but switches back to his original blue sneakers.

During the Distance Arc and the rest of Senior Year, Willy wears a summer-themed version of his previous attire. He still wears his teal platypus hoodie, but underneath it, he wears a dark-teal and lavender striped t-shirt. He also wears brown cargo shorts, white socks, and his blue sneakers.

On the last day of High School Experience, Willy wore a blue hoodie with the FHS logo on it, a light blue FHS t-shirt underneath, and his khakis and sneakers.

In cold weather, he wore a blue and yellow jacket with a yellow snow cap, black gloves, and black boots during most of the series. In Senior Year, he wears a dark purple jacket with lavender accents.

His Gym outfit in 8th Grade Adventures and High School Years consists of a teal t-shirt with khaki shorts. In the Forever Sophomores series, it was changed to a red t-shirt with blue shorts. In Advanced Education, he wore his usual clothes to gym, but in Unified Track, Willy wears a green t-shirt with red shorts and his orange and white sneakers. In Unified Basketball, Willy wears a lavender t-shirt underneath the standard navy blue and gray Unified Panthers jersey, green shorts with matching socks, and his blue sneakers.

When graduating from the 8th Grade, Willy wore a lavender dress shirt with a teal tie along with his usual khakis and sneakers.

During the Best Buddies Prom and Track Banquet, he wore a light blue dress shirt with rolled up sleeves, a green bow-tie, beige trousers held up by dark brown suspenders, and brown shoes.

During Aunt Sally and William’s Wedding and Homecoming, Willy wore a reddish-brown suit with the jacket unbuttoned and an untucked white shirt underneath it, a loose, lavender tie, and brown saddle shoes.

In the alternate timeline, Willy wears a dark purple suit over a light blue vest and a white shirt, as well as brown shoes. In his platypus form, he wears a purple hoodie with darker sleeves.

During the home videos in "Memories", Willy is in his platypus form, and wears a light beige sweater with dark brown trim instead of his usual brown t-shirt.

In "Comatose", Willy was a platypus yet again, and retained his brown shirt, but after getting sprayed by a skunk, he changed to a red and white baseball tee-shirt before switching back to his original shirt.

In the alternate future created by Annabelle, which takes place in the year 2025, Willy is 23 years old and is in his platypus form. He wears a purple blazer with a pink pinstriped turtleneck underneath. Sometimes, he would wear a lavender coat over a blue and white striped shirt. In his human form, Willy wears a purple Hawaiian shirt with a blue floral design, khaki cargo shorts, and black sandals.

During graduation, Willy wore a black graduation cap and gown over a white shirt, brown slacks, and his blue sneakers.

As a kid, Willy's family was pretty wealthy, everything was perfect for him. Until one day, Willy was nervous about his first day of Kindergarten, so Stuart built a robot platypus to go for him, much to Carol's dismay. Stuart then reveals that he spent all of the family's savings on the robot platypus, causing the family to go broke. At school, Willy(as a platypus) was bullied by a bunch of kids for being a platypus. When they started to beat him up, Tom stepped in and fought them off. The two became best friends ever since. For the next 7 years, he was always invited to Tom's house for a sleepover and they hung out non-stop. However, things wen't going so good for Human Willy. His family now lived in a shack and Willy's parents started drinking and arguing. Stuart then decided to drop the kids off at an orphanage to save some money. Shortly after, Willy's foster parents died, and now him and his brother lived alone in their apartment. In 6th grade, he met Patrick, who constantly gave him bread, causing him to have an "allergic reaction". Eventually, the "allergies" got so bad that Platypus Willy stopped working, which is why he doesn't appear in South Park: The Metal of Trust. Months later, Willy returns as a human and reveals that his Platypus persona was all a lie. He then started to chase Tom and Trent's bus and die every single day, until the episode "Quest to Kill Willy", when Patrick guns him down after he tries to kill the teachers. He is eventually revived and becomes Patrick's hostage until Patrick releases him at the end of Season 5. Afterwards, he continues his bus chases until Alex gets him sent to juvie in "School Daze Christmas Movie". He's been Trent's cellmate and attending school with the gang ever since. He got out of juvie at the end of Advanced Education and moved in with Tom, whom he still goes to school with until he graduated in 2020.

Willy gets along well with every main character on the show, except for his nemesis Nathan, who stole his popularity in Season 19. Since then, all of his new friends he made in the previous season has started to mock him for his beard (A.K.A. pubes), messy hair, and his habit of walking on his toes. However, he does get along very well with his newest friend Eddie Hines.

Willy's Artwork for the Original Series

Willy in Adventures in South Park 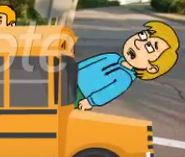 Willy getting hit by a Bus 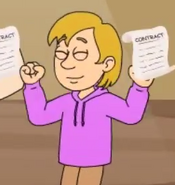 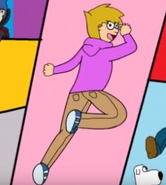 Willy in the FS Intro 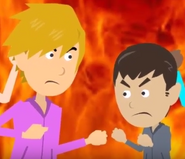 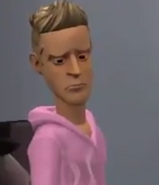 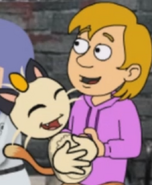 Willy's Road to the Omniverse Artwork

Willy's Artwork for the Dog-Daze Series

Willy as a Platypus

Add a photo to this gallery
Retrieved from "https://school-daze.fandom.com/wiki/Willy_Fredrickson?oldid=7903"
Community content is available under CC-BY-SA unless otherwise noted.