The Return of Chef(South Park)

William P. Connelly, is the main antagonist of the entire School Daze series. He is the Father of Tom, Allison, and Alex, as well as the step-brother and later husband of Aunt Sally. He used to insult his family for dumb reasons. This went on until he moved out in “William’s Departure”. He did return a few episodes later with a positive attitude, up until “Meet William’s Mother”, when he stopped taking his meds. This caused him to act like a jerk towards his family again. He was the leader of the Super Adventure Club and appeared in the South Park Season Ten episode, "The Return of Chef". He remained the leader until Chef and the children went there and blew it up in the Adventures in South Park episode “Chef’s Return from the Dead”. His injuries were so severe he had to get plastic surgery.

William is a very grouchy man. He would always yell at his family and get angry over the littlest things, whether it be traffic, losing something, being late, etc. According to Sally, he is Childish and Bipolar. This is shown to be true, for he has been shown being nice to the family on a few occasions, for he would take his family to the movies almost every Friday. As for his childish behavior, well, he has been acting like a spoiled little child in several episodes, like for example, if he went to a restaurant, and if the service was slow or the waiter gave him the wrong meal, he would yell at Sally or just storm out of the restaurant, though the latter reaction became less common in newer episodes. There are a few reasons why he is such a jerk. Like for example, he lost his father, his wife, his uncle, his brother, his aunt, his job, and his own club. It is possible that he is just depressed. In South Park, he was shown to be somewhat caring for human life, as he did not want to kill the boys. However, he does not have any moral objections to psychologically traumatizing children to get their "marlocks". In “William’s Departure”, he moved out of the house and was never seen again until “William’s Surprise Visit”. Since then, he was shown to be a bit nicer. However, starting at “Meet William’s Mother”, he was back to his old, verbally-abusive self. As mentioned before, William likes to take his family to the movies. Not only does he like it, he is ADDICTED to going to the movies. He drags his family to a movie night every Friday, and would rarely do anything else. If he were to plan a different event, William would always try to put the movies into the equation. If there was an opportunity for him to take the gang to the movies on a different day, like if there was no school or if Uncle Jerry is for some reason unable to take them for the weekend, he will not pass it up. The family hates going to the movies with William because of his anger, but he takes them anyway, and it usually ends in disaster.

William has fair skin and blue eyes. He is bald with orange hair on the sides. He always wears a hat to cover his bald spot. In the Summer School Daze mini-series, he temporarily wore a bandage on his left leg due to the events of "Chef's Return from the Dead".

In South Park, he wears a white, pith helmet pince-nez, and carries a riding crop. He also wears a white dress shirt, white pants, black and white boots, and a pink ascot.

In 8th Grade Adventures, he wears a blue cap with the Boston logo on it, a light blue dress shirt with chest pockets and rolled up sleeves, a white undershirt, a black belt with a gold buckle, blue jeans, and white Nike sneakers.

His usual clothing in High School Years, the Paradise series, and Forever Sophomores consists of a t-shirt or polo of varying colors, usually red, blue, teal, gray, or green. He also wears his blue jeans and the same sneakers. On his head, he wears a navy blue Boston cap. He sometimes wears a gray or green hoodie with this outfit.

He can also be seen wearing 3 other recurring outfits:

In Advanced Education and the Summer Era episode “Back in Franklin”, William was seen wearing a pale and navy blue patterned t-shirt with his blue jeans, and white sneakers from his primary outfit. On his head, he wears a navy blue cap similar to his original one, but instead of a red "B", his hat has a pair of red socks on it, symbolizing the Boston Red-Sox. His shirt is red in the promotional artwork and is seen in different colors as well(such as blue, red, green, black, or gray). In cold weather, he would wear a hoodie with this outfit, and starting with Late-Season 6, William replaces his blue cap with a black and yellow Bruins cap, though he still wears his old one occasionally.

In the Dog-Daze series, William's main shirt is a red, white, and blue tie-dye Red-Sox t-shirt, while still wearing his Boston cap, blue jeans, and white sneakers. Like in the previous series, William's shirt varies from time-to-time. His cap is either Red-Sox or Bruins-themed, and colored blue, red, or black/yellow.

In Senior Year, William’s main outfit is a deep-blue Boston cap and a gray short-sleeved polo shirt with the Boston logo on the top right corner, as well as the same blue jeans and white sneakers from his primary outfit. He is also seen wearing a t-shirt or polo that is either plain or Boston Sports-themed, along with his usual jeans and sneakers. He wears either a Red-Sox or Bruins-themed cap on his head. In cold weather, he would wear a sports jacket, sweater, or hoodie. His clothing is normally seen in the colors red, blue, green, gray, white, or black.

In 1981, William was 12 years old, had a full head of orange hair, and  wore a blue t-shirt with a white graphic on it, darker blue cargo shorts, blue striped socks, and gray sneakers with black soles.

In 1987, William was 18 years old and wore a light blue t-shirt with a serpent-graphic on the front and left sleeve, a darker blue vest with a pink graphic on the back, a gold wristband, grey cargo pants with magenta highlights, and dark-grey sneakers with blue stripes.

In 1989, William was 20 years old and wore a teal varsity jacket with  red trim and white sleeves, a white short-sleeved undershirt, blue jeans,  and white sneakers with dark-teal accents. He also wore this outfit during a flashback in “Geometry MCAS Part 1: The Top Dog on Campus”.

In 2001, William was 32 years old, and his orange hair was now  greying due to the stress of living in an unhappy marriage with Jessica. He also has a stubble and wears a navy blue cap with a dark-red brim, a red hoodie with blue trim over a white shirt, dark blue jeans, and grey sneakers with blue designs.

When he lived in Wampanoag, he had a mustache and glasses. He wore a dark green lumberjack hat, a black suit jacket over a white dress shirt, a red tie, the same belt from his primary outfit, blue trousers, and black dress shoes.

William is shown wearing several outfits throughout the Forever Sophomores finale. All of the outfits he wore are listed below:

In "Back in Franklin", William wore the same outfit he currently wears in Advanced Education.

In “Hingham is Where the Start Is”, William wore his previous outfit at the beginning, but once he arrives at the movies, he wears a light gray t-shirt with “Boston Red Sox” written on it, along with his usual navy blue cap, blue jeans, and white sneakers. After the movie, he wears his red jacket from the movie with this outfit.

In Anime Extravaganza Movie: Endless Summer, William wears several outfits. Each one is listed below:

During his cameo in OH012, he wore the same blue shirt, but his blue jeans were replaced by red shorts, and he is both hatless, and barefoot.

In the Halloween Special of Advanced Education, William wore a blue and red sweater with his usual outfit.

In the Thanksgiving Special, William wore 4 different outfits, each one is listed below:

In the Christmas Special, William wore 3 different outfits, each one is listed below.

In the Season 4 finale, William wore a gray hoodie over a red shirt and black pants.

During the Advanced Education finale, William wears 5 different outfits. Each one is listed below:

William was born on April 9, 1971. When he was 2, his mom left him and moved to California, leaving his father to take care of him. He then re-married Gammy and William became Sally's step-brother. Months Later, William's father died in a gruesome car accident, so Gammy had to take care of him. Many Years Later, he married Annabelle and they gave birth to Tom and Allison. They then moved in with Sally, Jerry, and Michael, making it a "Full House". Annabelle was diagnosed with AIDS after Allison's birth, and things got worse when she became pregnant with Alex. Shortly after his birth, Annabelle passed away. Depressed, William left the family to form the Super Adventure Club. During his time as the Super Adventure Club Leader, he lured Chef into his club and brainwashed him into becoming sexually interested in children. After the boys brought his memory back, He kidnapped Chef again. When the boys tried to rescue him, Chef died a gruesome death. However, William recovered his corpse and turned him into Darth Chef. Years later, he was arrested along with his son and the other members of the Super Adventure Club. Later on, they got out and started up the club again, but it wasn't long until Chef and the boys came along and blew up the place. William survived, but he was seriously injured. After all that stuff went down, he returned and began to verbally abuse the family. He eventually proposed to Aunt Sally, and the two later got married in the Senior Year series.

William serves as the main antagonist in several episodes of the series. here is a list of times where he has antagonized our heroes in some way:

William often has an argument with pretty much anyone he meets, especially his family. Because of this, Aunt Sally always tries to kick him out, but he always refuses to leave. In Later Seasons, Aunt Sally is shown to be loving and caring towards him, and is willing to look past his aggressive side, despite the kids' objections. The two became so close that they eventually got married in the Senior Year series. However, she would still yell at him for either being a jerk or yelling at the kids. Cole doesn't trust his kids around William because of his Verbal Abuse, but Boris gets along with him very well.

William tries to hypnotize the boys

"Next Week, We will molest kids in Antarctica" 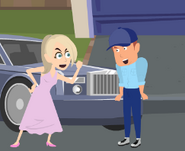 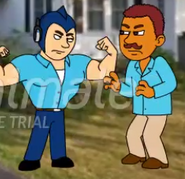 William's Road to the Omniverse Artwork

44-48 Year-Old William in Senior Year flashbacks.
Add a photo to this gallery
Retrieved from "https://school-daze.fandom.com/wiki/William_P._Connelly?oldid=7909"
Community content is available under CC-BY-SA unless otherwise noted.