Enter Timmy Turner: The Average Kid Who No One Understands
Wanda Venus Fairywinkle-Cosma is one of Timmy's godparents who is from The Fairly OddParents!. She is also the wife of Cosmo .

Wanda is depicted as being smart and caring. Unlike Cosmo, she tries to prevent Timmy from wishing for things which can be disastrous, though her attempts often fail. However, she is responsible for the extinction of dinosaurs, 65 million years ago. She has a sister who is popular named Blonda whom she fights with a lot, as Wanda believes her sister's life as a Soap Star is easier than hers as a housewife. Wanda also has a father named Big Daddy, who also despised Cosmo similar to how Mama Cosma dislikes Wanda but to a much lesser extent. A running gag in the show is her constant nagging and tormenting of her own husband's stupidity.

Wanda is first seen in "Enter Timmy Turner: The Average Kid Who No One Understands", as she is watching Timmy Turner use the computer, before Vicky barges in and tries to attack him, but after seeing Cosmo and Wanda, Cosmo knocks her out, temporarily giving her amnesia. They later meet up with Caillou and go to Accaplucco's and Westwood, before training and participating in the Fairy World War. Afterwards, Wanda joins the gang on their quest to rescue Perry.

Wanda has fair skin, pink eyes, and pink hair. She also has pink lipstick, gold earrings, a gold crown, insect wings, and a gold star-shaped wand with a black handle. Her normal attire consists of a yellow t-shirt and black pants with matching shoes. 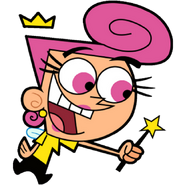 Add a photo to this gallery
Retrieved from "https://school-daze.fandom.com/wiki/Wanda?oldid=2678"
Community content is available under CC-BY-SA unless otherwise noted.