Vinny Larsson is a reccuring character and an antagonist in the School Daze series. He was purchased by the Griffins at Quahog Pets as a replacement for Brian in "Life of Brian" following Brian's death. He is the former pet, best friend, and loyal companion of Tord Larsson. In “Simpsons Guy 3: Disney Edd-venture”, it is revealed that him and Tord were responsible for the attempted murder of Brian. Tord adopted Vinny as a puppy after finding him on the road as he ran away from his owner due to his unfair rules. This was revealed in "Road to the Omniverse".

Like Tord and his family, Vinny is shown to be evil. He would always accompany Tord in his shenanigans. An example of this would be that he tried to run over Brian with Tord. If they succeeded, he would pretend to be the new Brian until he gained the Griffins’ trust, and once he did, he would murder the remaining Griffins with help from the Larssons. Despite his evil antics, he genuinely cares about Olivia. Ever since he joined the band “Red Shirt, Blue Shirt”, he would often go with Olivia to perform. Olivia’s mother, Daisy, does not approve of this, so she frequently assaults Vinny whenever he went near her daughter. After being sent to the Reformatory School, he becomes more kind and obedient, and is now unwilling to wreak havoc with Tord Larsson, at least until he was turned evil again by the Akatsuki Clan.

Vinny is a pussy hound with tan fur on his head, back, arms. and legs, and light yellow fur on his belly. He also has black eyebrows, an italian accent, a pointy snout with a small black nose, a small tail, and a chubby belly. He always wears a black collar with a gold tag.

His Red Shirt, Blue Shirt uniform consists of a blue short-sleeved polo shirt with brown slacks and no shoes.

After being sent to the Reformatory School, Vinny discards his collar, and begins wearing the uniform for said school, consisting of a white short-sleeved dress shirt with a red tie underneath a blue sweater-vest, and like Rigby, he still lacks pants and shoes.

When he was turned evil by the Akatsuki Clan, Vinny's eyes were colored red, and the colors of his uniform were changed to match the primary Akatsuki colors. His vest and tie are now black, while the color of his shirt was changed to red. Also, the gold badge on his vest is replaced by the Akatsuki logo.

In the Dog-Daze of Summer series, Vinny can be seen wearing the Reformatory Camp uniform, which is in a similar color scheme as his previous school uniform. He wears a short-sleeved, red collared shirt with chest pockets and a blue ascot. Under his shirt, he wears his original black collar instead of a white undershirt, and continues to go pantless and barefoot.

In Senior Year, Vinny wears the standard blue and red Larsson Infantry trench-coat with the sleeves torn off and no shirt underneath it. He retains his collar and is still naked on his lower-half.

Prior to the series, Vinny was owned by a man named Frederick Jones and his sister Ellie. His owner was the host of various dog shows, and wanted Vinny to participate in them, but Vinny didn't want to, causing tension between the two. He had fallen in love with a poodle who lived across the street. He would hang out sneak out of his house to spend time with her, until she was eventually killed by a car. Frederick showed no remorse for Vinny, and told him that if he didn't sneak off, she would still be alive. This was the final straw for Vinny, as he ran away from Frederick's house that night and met Brian on the streets. The two were best friends. They would draw art and steal food together. They eventually attended Brown University together, and Brian gained instant popularity. Vinny, however, was not so lucky. He was constantly being picked on by the other students, and even got in trouble with the staff for no apparent reason. Upon becoming "the top dog on campus", Brian began ignoring Vinny and treating him like an outcast, and continued to do so up until Senior Year, when Vinny confronted Brian and said some hurtful things. They were hurtful enough for Brian to drop out and run away in tears. This resulted in the staff expelling Vinny and allowing the jocks to beat him up. Vinny ran away from the university, and was suddenly hit by a car. It was Tord's car. Tord, along with his friends came to Vinny's aid and let him stay at their house. Tord and Vinny had formed a close bond since then. Eventually, Tord moved out of Edd's house, and Vinny came with him.

Role in the Series Edit

Years Later, Vinny was purchased by the Griffins at Quahog Pets as a replacement for Brian in “Life of Brian” after he was killed by a car. There, they find Vinny, a "pussy hound" who claims to be 1/16th cat. He wins over Peter by being able to talk and suggests that if he is sent to fetch a stick, he could bring back an iPhone that "fell off a truck" instead. Feeling guilty that he was unable to save Brian since destroying his time machine, Stewie at first refuses to accept the new dog until he discovers that Vinny had just lost his previous owner around the same time and thought he and the Griffins needed each other and comes to accept Vinny. As of "In Harmony's Way", he replaced Brian in the "Theme Song". In "Christmas Guy", Vinny helped Stewie distract his past self so he could steal the return pad from his backpack and travel back in time to save Brian. As a result, the family never got Vinny from the pet store and he and the Griffins never met. In Simpsons Guy 3: Disney Edd-venture, Him, along with Tord and his family go to Disney World and try to kill Mickey Mouse after the death of Debbie Stone. They also try to kill Edd and his friends, The Simpsons, and The Griffins, only to be taken away by the police.  Near the end, they damage the plane, which the gang were gonna use to get home, they are eventually arrested again. In School Daze: The Movie, they break out of prison and try to kill Caillou, but they are stopped by him and his friends and get arrested by Joe, they escape at the end. In Simpsons Guy 4, The Pokemon Daze, they get Team Rocket to kidnap Pikachu and Stewie. Vinny has a cameo role in "The Boys in the Band". After Olivia Fuller steals Brian and Stewie's musical group Red Shirt, Blue Shirt, She replaces Brian with Vinny so she has a singing dog as well. In Uncle Funtime: Thanksgiving Edition, Him, Tord, and Team Rocket trick a little boy into kidnapping Pikachu and trying to kill Ash and the gang. In Regular Show, they try to help Anti-Pops destroy the universe. They are disappointed when Pops and Anti-Pops die in School Daze 2: A Jolly Good Battle. In Larsson and the Power of One!, him and his family give potions to Lois and Daisy, causing them to be allergic to dogs and straw. They also blinded Carter, thus forcing Brian to take care of him. However, both of those plans fail, so they decide to give candy to Stewie, which contains the demon, Fred Blackout. Meanwhile, the potions caused Lois to lose an arm, Daisy to turn into a cat, and Boots to become 50 feet tall because he drank the potion as well. Then, Olivia ends up eating the candy and gets possessed by Fred Blackout. After killing Stewie, Vinny and his family promise to take it easy with their evil schemes. In the Paradise series, Him, along with Tord and Olivia followed Tom and the gang around and tried to ruin their summer. He helped the Larssons raid New York City in "Uncle Funtime 4", tried to get Brian to join the dark side in "Animas Extravaganza", participated in Eon's Zombie Apocalypse in "Road to the Omnivrse", and is currently working with Bill Cipher to start another Weirdmaggeddon in the "Rise of Bill Arc". After Perry's rescue, he was sent to a maximum security prison. 2 months prior to Advanced Education, he, along with Olivia, have been bailed out by Daisy, who then sent them to a reformatory school. Now he is well-behaved, and is no longer willing to work with Tord, up until the end of the Akatsuki Revival Arc, when he and Olivia were kidnapped by Team Rocket and turned evil using the Evil-Inator. He has been helping the Akatsuki with their evil deeds ever since. 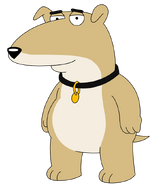 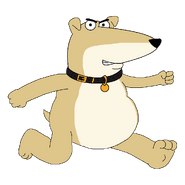 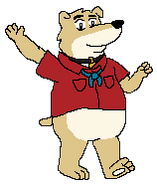 Add a photo to this gallery
Retrieved from "https://school-daze.fandom.com/wiki/Vinny_(Dog)?oldid=6524"
Community content is available under CC-BY-SA unless otherwise noted.