Dinner with Michael and Ronny

Jerry Richard Connelly, is a main character in the show School Daze. He is the Uncle of Tom, Allison, and Alex. He lives in Milford with his son Michael and eventually his girlfriend Terri and his son's best friend Ronny. He used to be married to Sally, but they got divorced a long time ago. Every weekend, him and Michael would pick up Tom, Allison, and their friends and take them to their house so they can play computer games.

Like Michael, Jerry is a Computer Whiz, but he doesn’t use his computer to play video games. Instead, he uses it for business purposes, Like paperwork, bills, etc. He is also a big fan of The Simpsons & Family Guy. Jerry would always make references to both of the shows. Like for example, he would use some catchphrases from Family Guy once in a while. He also used Homer’s catchphrase “Doh” on a few occasions. In earlier episodes, Trent used that catchphrase as well. Jerry is also very helpful with both school work and emotional support. For example, he has helped Allison with school projects on a few occasions. He also helped Tom & Trent with their Science Fair project in “Data Weekend”, bought them supplies for their Ecosystem project in Behavioral Science, and even took them to a classmate’s house so they can work on their History Newscast project. Jerry has even got Tom and Alex a therapist to talk to about William’s verbal abuse. He also likes watching Big Brother with Allison. They do this while Michael, Tom, and the gang are downstairs in the Gaming Lair, playing Video Games. He also likes to joke around a lot, often making puns referencing songs or telling inappropriate/sexual jokes. Overall, Jerry is a pretty fun, loving, caring, and laid-back guy, often taking the kids out to eat and occasionally bringing to fun places on the weekends. He even took them to Dave and Buster’s twice. Despite this, he is still strict when he needs to be, especially when it comes to eating healthy.

Uncle Jerry has fair skin and brown eyes. He has short brown hair with a goatee. He wears glasses and a silver watch on his left wrist. He was born without a left ear, so the doctors made him a fake ear. However, he can't hear out of that ear, making him half-deaf. Like many characters, Jerry;s attire changes very frequently, he wears 4 main outfits throughout the series.

In the Original Series, He wore a dark blue short-sleeved polo shirt, khaki pants, and black dress shoes. He also wore this in Wampanoag.

In the 8th Grade Adventures series and the intros, he was mainly seen wearing a gray short-sleeved polo shirt, dark blue jeans, and the same black dress shoes from his previous outfit

In School Daze: The Movie, he was mostly seen wearing A white hoodie, a black undershirt, dark gray shorts, and gray sneakers with red and blue accents.

In High School Years and Forever Sophomores, his outfits begin to change more often, but he mainly wears 3 recurring outfits.

Uncle Jerry is shown wearing 2 outfits throughout the Forever Sophomores finale. All of the outfits he wore are listed below:

During the Hershey Park Arc, Uncle Jerry wears an outfit in a similar format to his casual summer outfit, but with the colors from his primary outfit. He wears a light gray t-shirt with dark blue long shorts. On his feet, he wears white socks and his black and red Osiris sneakers.

During the Power of Peruto Arc, Uncle Jerry wears several outfits. Each one is listed below:

In Anime Extravaganza Movie: Endless Summer, Jerry wears several outfits. Each one is listed below:

In the Advanced Education Series, Uncle Jerry mainly wears a blue and white pinstriped dress shirt with long sleeves, a black belt with a silver buckle, dark brown trousers, and his black dress shoes. This outfit is often seen in different colors. He also wears a t-shirt of varying colors(usually blue, red, white, black, gray, brown, or other colors) with black shorts(sometimes red, gray, blue, white, or other colors) and sneakers when not at work. In the promotional artwork, he wears a dark blue long-sleeved dress shirt, a black belt with a silver buckle, and the khakis and shoes from the Original Series. In colder weather, he would wear his black winter jacket, his gray collared jacket, a light blue jacket, or his black UFC hooded jacket over a long-sleeved shirt of varying colors(usually blue, black, gray, white, or other colors), medium-blue jeans, and his brown shoes(sometimes Osiris sneakers). He would sometimes wear a green, white, or gray hoodie with this outfit.

In Advanced Education The Movie: Strong Forces Uncle Jerry wears several outfits. Each one is listed below:

During the Cipher's Law Arc, Uncle Jerry wears several outfits. Each one is listed below:

During Nona's Birthday Party in the episode "Judi & Vinny’s House Party! It's My Birthday and You're Invited!", Jerry wears a light blue jacket over a pink, blue, green, and white checkered dress shirt with long sleeves, black jeans, and his black dress shoes.

In Dog-Daze of Summer, Uncle Jerry’s primary clothing consists of a t-shirt of varying colors(usually blue, white, black, gray, brown, red, or other colors) with or without a brand logo on it. He also wears black, red, gray, or white athletic shorts, white socks, and high-top Osiris sneakers. However, his initial trademark look consists of a blue short-sleeved polo shirt, long, white Bermuda shorts, white socks, and white Osiris sneakers with black and red accents. When at work, he would wear a dress shirt or polo with trousers and formal shoes.

In Senior Year, Uncle Jerry’s main outfit is similar to his primary Advanced Education outfit, but the pinstripes on his white shirt are brown instead of blue. He would wear a button-up shirt or polo with a belt, trousers, and shoes(either with or without a sweater and/or coat) during work, formal occasions, and dinner-outings. On weekends, he wears a t-shirt with shorts and sneakers in warm weather, and a winter jacket or hoodie(sometimes both) over a long-sleeved shirt with jeans and boots(sometimes sneakers) in cold weather. His clothing is normally seen in the colors blue, brown, black, red, green, white, or gray.

Jerry was born on October 23, 1969. Like Sally, Jerry grew up in a town near Boston. He was raised by Nona and Pa. Due to the fact that Boston schools were terrible at educating students, Jerry had to attend a private school. Years later, He met Aunt Sally at his friend Greg's wedding. They dated for a few months before Jerry proposes to Sally using a birthday cake with "MARRY ME SALLY" written on it with icing. Sally said yes, though she now thinks that proposal was lame. After getting married, they give birth to Michael and end up raising Tom, Allison, and Alex as well after their mom died and their dad left them. They lived in Norwood for 3 years before moving to 2 Wampanoag drive in Franklin. they lived there for the next few years until Sally and Jerry got a divorce. Jerry took Michael and they temporarily moved to Westwood and stayed at Nona's house. Years Later, they move to 30 Madden Ave. in Milford. Tom and the gang visit their house every weekend and go out to dinner with them every Wednesday.

Jerry gets along with pretty much the whole family, but he does get irritated whenever one of the kids says or does something rude or inappropriate. He often gets pissed off at his now deceased dog whenever she pees or poops outside of the kitchen. He has also shown signs of detesting Rigby. 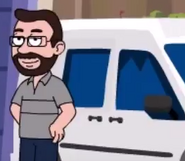 Jerry with his Truck 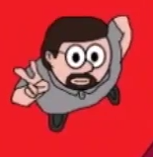 Driving the gang to his house 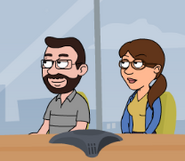 Jerry and Sally at a Meeting

46-49 Year-Old Uncle Jerry in Senior Year flashbacks.
Add a photo to this gallery
(ans
Retrieved from "https://school-daze.fandom.com/wiki/Uncle_Jerry?oldid=7908"
Community content is available under CC-BY-SA unless otherwise noted.