Timothy "Timmy" Tiberius Turner, is the protagonist of The Fairly OddParents! series. He is considered by his peers as "an average kid that no one understands." His parents sometimes ignore him and leave him under the care of his mean babysitter, Vicky. Because of this daily neglect by Vicky, Timmy was granted two magical fairy godparents, Cosmo and Wanda. 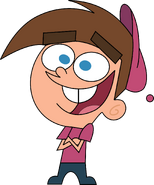 Add a photo to this gallery
Retrieved from "https://school-daze.fandom.com/wiki/Timmy_Turner?oldid=2670"
Community content is available under CC-BY-SA unless otherwise noted.