The Larsson Family is an evil family who serves as one of the major antagonists of the School Daze series. They are the family of Tord Larsson, consisting of his uncle Leo, mother Georgette, father Edward, brother Toby, and sister Trina. After the death of Debbie Stone, they began to wreck havoc for our heroes in the School Daze series.

There is no information about Tord, Vinny, or Olivia because there are already separate articles about them. For their articles, see Tord Larsson, Vinny (Dog), or Olivia.

Edward has tan skin, gray eyes, and curly light brown hair. He also has a shaved mustache and a small beard.

In the Simpsons Guy trilogy and Seasons 18-37 of the School Daze series, He was often seen wearing a white dress shirt underneath a red suit jacket, a black tie, a black belt with a gold buckle, blue jeans, and black dress shoes.

In Season 2 of Advanced Education, he wore an orange prison jumpsuit with a white undershirt and black shoes.

In Season 3 and onwards, Edward now wears a red long-sleeved dress shirt paired with a black vest, a blue tie, and black trousers. He keeps his belt and black shoes from his previous outfit.

Georgette has tan skin, blue eyes, and light brown hair, which can be seen in a ponytail.

In the Simpsons Guy trilogy and Seasons 18-37 of the School Daze series, She was often seen wearing a pink dress, a red jacket, and red shoes.

In Season 2 of Advanced Education, she wore an orange prison jumpsuit with a white undershirt and black shoes.

In Season 3 and onwards, Georgette wears an indian-themed set of attire, consisting mainly of a gold necklace, a short-sleeved, red top with gold trim that reveals her midriff, which is mostly covered by a dark green cloth. She also wears a red ankle-length skirt with gold trim, and gold sandals.

As a child, he wore a red and black striped polo shirt, blue denim shorts, and gray sandals.

In the Simpsons Guy trilogy and Seasons 18-37 of the School Daze series, he wore a dark red cap with matching shades, a red long-sleeve shirt, a gold medallion with a diamond on it, a gold watch on his left wrist, black pants, and gray boots.

In Season 2 of Advanced Education, he wore an orange prison jumpsuit with a white undershirt and black shoes.

In Season 3 and onwards, Toby discards his cap, shaves his hair into a mohawk, which he dyed red. He now wears a red leather jacket with a black undershirt, and black gloves with red borders. He keeps his sunglasses and black pants from his previous outfit, and on his feet, he wears a new pair of red combat boots.

As a child, she had pigtails and wore a green dress shirt, red overalls, and blue shoes.

In the Simpsons Guy trilogy and Seasons 18-37 of the School Daze series, she wore a purple T-shirt underneath a red tank top, dark red and pink necklaces, long, shredded, pink fingerless gloves, a black belt with a silver buckle, a dark green and blue striped skirt, and dark gray boots with dark green stitching.

In "The Weirdness War", her hair was purple and she wore a purple tunic, green stockings, and purple shoes. After her family got upset with her for not wearing red, she began wearing a red poncho with this outfit, which was given to her by Bill Cipher.

In Season 2 of Advanced Education, she wore an orange prison jumpsuit with a white undershirt and black shoes.

In Season 3 and onwards, Trina's hair was dyed into a lighter red, and is a lot shorter, and she wears a short, chest-length red jacket with black cuffs, a gray top underneath, a maroon plaid skirt, the same boots, and black gloves.

In the Simpsons Guy trilogy and Seasons 18-37 of the School Daze series, He was often seen wearing a red sweater with orange diamonds, a gray undershirt, green snow pants, and blue boots.

In Advanced Education, Leo lost a lot of weight and became more muscular. In Season 2, he wore an orange prison jumpsuit with the sleeves torn off, a white undershirt, and black shoes.

In Season 3 and onwards, Leo now has tattoos on each bicep, and replaces his glasses with black-framed sunshades with red lenses. He now wears a white wife-beater, red cargo pants, and darker blue boots.

All of the family members are evil, and are more than willing to help Tord Larsson with his evil plans. In Season 13 of Family Guy, Uncle Leo and Georgette were mentioned by Vinny. In Simpsons Guy 3: Disney Edd-venture, the entire family makes their debut and go to Disney World and try to kill Mickey Mouse after the death of Debbie Stone. They also try to kill Edd and his friends, The Simpsons, and The Griffins, only to be taken away by the police.  In Uncle Funtime: Thanksgiving Edition, Him and the rest of the family are broken out of jail by Tord, Vinny, and Team Rocket. In Larsson and the Power of One!, him and his family give potions to Lois and Daisy, causing them to be allergic to dogs and straw. They also blinded Carter, thus forcing Brian to take care of him. However, both of those plans fail, so they decide to give candy to Stewie, which contains the demon, Fred Blackout. Meanwhile, the potions caused Lois to lose an arm, Daisy to turn into a cat, and Boots to become 50 feet tall because he drank the potion as well. Then, Olivia ends up eating the candy and gets possessed by Fred Blackout. After killing Stewie, the family promises to take it easy with their evil schemes. However, they end up breaking this promise, as they continue to help Tord wreck havoc for the rest of the School Daze series, up until the end of Forever Sophomores, where they were sent to a maximum security prison. They broke out in Advanced Education, and are now helping Tord to try and get Olivia and Vinny back. 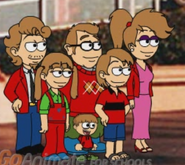 Add a photo to this gallery
Retrieved from "https://school-daze.fandom.com/wiki/The_Larsson_Family?oldid=4725"
Community content is available under CC-BY-SA unless otherwise noted.