Fry Cook at The Krusty Krab

Paddle to the Green

SpongeBob SquarePants (born July 14, 1986) is the titular protagonist of the popular animated television series of the same name and is voiced by Tom Kenny. Mainly, he is the primary Fry Cook at the Krusty Krab. He is also one of the 4 main protagonists of Adventure Sponge.

Spongebob is a square-shaped yellow sea-sponge with olive-green pours. He has bright blue eyes with eyelashes, a slightly curved nose, dimples with red freckles, and buck teeth. He is about the same height as Rigby. He is usually seen wearing a white short-sleeved dress shirt with a red tie, brown rectangular pants with a black belt, white socks with blue and red stripes, and black leather shoes with white laces.

SpongeBob is a clueless, abnormal, immature, fun loving and hyperactive character with a happy-go-lucky personality. He is an extremely determined person, and will often stop at nothing to accomplish a task. He is also somewhat dramatic to the people who are kind to him, for example, to the mailfish. "Karate Island" shows that he is also over-confident. Sometimes, though, he shows his devious side when trying to get Mr. Krabs and Plankton to work together. He sometimes tends to make mountains out of molehills, such as losing his name tag. "Missing Identity."

SpongeBob is very kindhearted and innocent, and very rarely acts openly mean to anyone, even his enemies. He is a very selfless and loyal person, especially towards those close to him. His selfless nature is most notably shown in "Best Day Ever," where he sacrifices his "perfect day" to help his friends. Despite his well-meaning intentions, SpongeBob's actions often annoy and cause trouble for those around him, most notably his next-door neighbor, Squidward Tentacles.

SpongeBob can become scared easily and usually panics when frightened. He is afraid of the dark (or what is in the dark) "Night Light" and clowns "Rodeo Daze." He also hates hot sauce. "Karate Choppers." Occasionally, SpongeBob is too ignorant to notice impending danger and his unworldly thinking may put himself or others in peril. He also cannot detect lies or malice information as easy as the other characters, mainly due to his naive nature.

SpongeBob's innocence also makes him overly trusting and very gullible, and he is easily manipulated by people who intend to use and/or harm him, such as Squidward, Mr. Krabs, and Plankton; most noticeably, he is always easily fooled by Plankton no matter how bizarre or obvious his disguises are. Even though he is generally good-natured and easygoing, when frustrated and angered, SpongeBob can be sarcastic, rude arrogant and 'foul-mouthed' to his friends, even Mr. Krabs, whom he treats as a father figure. Ironically, Squidward is the only character that SpongeBob never insults when he is angry; with the exception of the episodes "Can You Spare a Dime?" and "Breath of Fresh Squidward."

Sometimes, SpongeBob is a nudist. In which he has a tendency to take off his clothes whenever he wants to. He was shown naked in "Ripped Pants," "Nature Pants," "The Paper," "Hooky," "Pranks a Lot," "All That Glitters," "Rise and Shine," "Overbooked," "Stuck in the Wringer," "Model Sponge," and "Gramma's Secret Recipe." SpongeBob got nude when he wanted to live with the jellyfish in "Nature Pants." In addition, in "Model Sponge," SpongeBob got undressed when he is used in a sponge commercial. In "Pranks a Lot," SpongeBob and Patrick had to strip in order to use the Invisible Spray. In "Overbooked," during the presentation, he is requested to undress and enter the machine.

Before the School Daze series, Spongebob teamed up with the boys of South Park to compete against Scott Tenorman in a swim race in order to get Patrick out of middle school. They succeeded, however, Scott proceeded to take Patrick hostage and threatened to kill him. That’s when Jesus showed up and took him to hell. After that, He made a few minor appearances in the series.

In “Gathering the Aquatic Heroes”, he joined Tom and the gang as they were going to An Unlikely Story, where they read a few books and listened to people sing. During the Uncle Funtime 4 Arc, he joined the gang on a trip to New York City, as well as rescuing Patrick from Team Rocket afterwards.

In “Ronny’s Not A Fan”, he, along with Finn and Patrick, went to Westwood to warn Michael and Uncle Jerry that Ronny was planning to kill them. They then stayed with the gang for the rest of the day, as Ronny was chewing Michael out for neglecting him before the two eventually reconciled.

In “Paddle to the Green”, he doesn’t join Finn and Jake on their mission, as he is already on a road-trip to the surface with Patrick. However, he does appear at the very end of the episode, where Finn and Jake give him his birthday present. 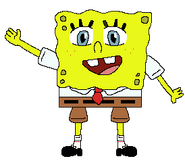 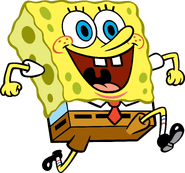 Add a photo to this gallery
Retrieved from "https://school-daze.fandom.com/wiki/Spongebob?oldid=6746"
Community content is available under CC-BY-SA unless otherwise noted.