Slinky Dog (better known as Slinky) is one of the supporting characters in the Disney/Pixar Toy Story movies. He is a wooden toy dachshund who speaks with a graveled Southern accent.

The character's name and basic appearance are modeled on a much older pull-toy dog, manufactured by James Industries (the Slinky company). When Toy Story was released theatrically in late 1995, the original toy had been out of production for at least five years. Thus, while toys of Woody, Buzz, and even a special edition Mr. Potato Head had been rushed to the market, company CEO Betty James had "mold problems" reworking the toy, and it was some time later when Slinky Dog toys (now bearing the likeness of the Toy Story version) were shipped to stores.

Slinky is a toy dachshund that possesses a wooden front and hindquarters with a very stretchable metal slinky as his middle (hence his name), vinyl ears and a green collar.

Slinky is a nice, friendly and playful dog. He is quite well-behaved compared with some of Andy's other toys. He shows faith in Woody (sometimes acting like his pet), and he'll do anything to help his friend out. He is friends with all of Andy's toys, has a sense of humor, and enjoys playing checkers with Woody. Staring with Advanced Education, Slinky began to constantly harass Jessie for her stupidity, just like Bonnie does.

In the first film, Slinky is first seen coming out from under Andy's bed. He likes playing checkers with Woody. He is also one of the toys who believes it was an accident when Woody knocks Buzz out the window. He isn't happy about Woody's disappearance. He catches the lights when Woody calls them from the window of Sid's room until a grumpy Mr. Potato Head snatches them as he tells the other toys as to if they have forgotten of what he did to Buzz. When he and the other toys see Buzz's severed arm, Slinky looks devastated at what his friend seems to have done, and is convinced to now side with Mr. Potato Head after all. Woody desperately pleads with him to help, but all he can do is very sadly close the curtains of Andy's window, despite that Andy already misses Woody.

He is also guilty when he sees Woody was telling the truth after Mr. Potato Head ordered for him to be tossed overboard. He and the other toys make amends and assist Buzz, Woody and RC to make it to the moving van. He uses his stretching ability in an attempt to pull them into the van, but when RC's batteries rapidly drain, he becomes stretched to the breaking point. He loses his grip on Woody and gets sprung back into the moving van without them. He appears to be badly damaged, and the toys try and comfort him while he laments he should have held on longer. He looks ecstatic when Woody uses the rocket strapped to Buzz to return to them. His slink has been fixed at the end of the film when the toys have been settled in Andy's new room.

In the second film, when Woody is looking for his hat to go to Cowboy Camp with Andy, it is Slinky finds the hat. The bad news is that he got it from Buster, Andy's dog. After Al McWhiggin steals Woody, Slinky goes on the mission led by Buzz to rescue their valuable friend. The rescue squad uses Slinky's coil as a bungee cord to jump from Andy's house. Slinky also has to use two traffic cones (one on his head, another on his tail) when crossing the street due to his unique size and structure. At Al's Toy Barn, while searching in Al's office with a newer Buzz Lightyear action figure that the toys mistake for Andy's, Slinky encounters two Rock 'Em Sock 'Em Robots on Al's desk and asks them if they have seen "a cowboy doll with a bad arm" (referring to Woody), only to indirectly cause the two robots to fight. As Al enters the office, the New Buzz orders the toys to stow away in Al's bag, then they arrive at an apartment that houses Al's Penthouse. After entering the apartment through an air vent, they climb up an elevator shaft and arrive at the topmost floor with help from a rising elevator. When the toys break into the penthouse, Slinky and Bullseye have a growling match that Jessie tries to stop, but Slinky uses his coil to tie up Jessie and Bullseye. He then orders his allies to grab Woody and escape, but they are stopped by Andy's Buzz, who proves that he is the one that the toys recognize, to Slinky's relief. Slinky feels disappointed when Woody intends to stay with his Roundup gang to be put in a museum, and takes a possibly one last look at Woody before he leaves with the others, but brightens up when Woody declares that he is coming with them. After Al packs up Woody and the Roundup collection into his case and leaves the penthouse, the toys jump onto the elevator, and Buzz opens the emergency hatch on the elevator and uses Slinky to fish Woody out. Just as Slinky opens the case and grabs Woody's hands, the elevator reaches the lobby and Al steps out, causing Slinky to become stretched out, but Stinky Pete grabs Woody and pulls him back into the case, making Slinky accidentally release Woody and rebound. After the toys leave the apartment, they hijack a Pizza Planet delivery truck, and Slinky controls the pedals of the truck to chase Al to Tri-County International Airport. At the airport, Slinky follows Buzz, but his hind legs become stuck to one of the luggage handles and is unable to follow Buzz as he becomes overstretched again. However, he is able to rejoin with the other toys as they stun Stinky Pete with flash cameras and finally capture him.

After the toys return home, Slinky is seen standing with Buster at the door, interpreting that Buster wants to get out of the room. Finally, Slinky is among an audience of toys who gather around to watch a fixed Wheezy sing "You've Got a Friend in Me."

In the third film, Slinky's voice gets a little deeper, and his eyebrows are slightly trimmer. He goes to Sunnyside Daycare with the others when they think that Andy no longer wants them and are put out on the sidewalk by Andy's mother (who is much older than she was in the previous films) as trash. Slinky is still very loyal to his friends but is heartbroken when he believes he and the other toys are thrown out by Andy. At Sunnyside, Slinky, Hamm and Barbie shake hands with Stretch. Later, Slinky is seen being tangled up constantly by the young children, and is easily dispatched by Lotso and his gang, and imprisoned. Slinky is seen to be the happiest toy to see Woody return and assists him in getting rid of the Monkey toy who monitors the security cameras. While the Monkey is overpowering Woody, Slinky grabs a piece of scotch tape, and the two succeed in taping up the Monkey. After reaching the dumpster, Slinky, being old but still has a spring in his step, manages to stretch himself across the open dumpster to the closed one so the toys can climb across to safety. Just as the toys are about to execute their leap to freedom, Lotso and his henchmen stop them, and Lotso kicks Slinky's paws, causing him to return to the chute.

After the toys end up at the Tri-County Landfill, and are pushed onto a garbage conveyor belt, Slinky is the first to be sucked up by a magnetic ceiling due to the metal slinky in his body. After the toys clear the shredders, they are left to die in an incinerator due to Lotso's betrayal, forcing Slinky to hold hands with Woody and Hamm when Buzz and the other toys held hands with one another, but are saved by the Aliens commandeering a giant claw at the last moment. Once outside the furnace, Slinky is the most vocal about wanting to get back at Lotso for leaving them to die, along with Hamm. But Woody tells Hamm and Slinky to forget it because Lotso isn't worth it.

When the toys return home, they use Slinky as a bungee cord to jump back up to the roof (the similar way Buzz's rescue party have done in the previous film when leaving). He tells Woody to have fun at college with Andy as he says his supposedly last farewell to his loyal friend. In the end, he and the other toys are eventually donated to Bonnie Anderson, a little girl who has taken Woody home earlier in the film.

During the end credits, when Dolly shows the toys the drawing Bonnie has made for each toy, Slinky says his catchphrase "Golly bob-howdy!" as he sees the one made of him (however, he doesn't say the catchphrase during the main events of the movie).

Finally, Slinky is last seen watching Buzz and Jessie perform a pasodoble to "Hay Un Amigo En Mi," the Spanish version of "You've Got a Friend in Me."

Slinky returned once more in the latest installment. He went on a road trip with his friends. 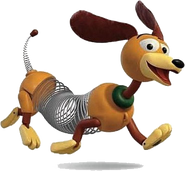 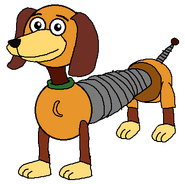 Add a photo to this gallery
Retrieved from "https://school-daze.fandom.com/wiki/Slinky?oldid=6233"
Community content is available under CC-BY-SA unless otherwise noted.