Sheen is noted for his extreme, constant bouts of hyperactivity, which he demonstrates multiple times per episode, along with his misdirected intelligence and short attention span, to the annoyance of his peers. Alongside UltraLord, Sheen also appears to be interested in superheroes in general and in typical masculine subjects such as wrestling, and is strongly infatuated with Libby Folfax, becoming her boyfriend by the time of the program's conclusion.

Sheen is first seen in the episode "Enter Jimmy Neutron: Agony and the Brains", where Him/Her, along with Jimmy, Carl, Cindy, and Libby. After meeting up with Caillou and co, they film funny videos together, and later team up to stop Professor Calamitous and Beautiful Gorgeous from flooding the world.

Sheen has fair skin, brown eyes, a triangle-shaped head, and spiky brown hair. His Normal attire consists of a turquoise Ultra Lord t-shirt with a darker turquoise border(dark teal in movie), black jeans, and turquoise and white high-top sneakers. In Planet Sheen, he wears a turquoise long-sleeved shirt with a blue border, a black belt with a silver buckle, blue pants, and blue boots 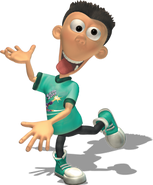 Add a photo to this gallery
Retrieved from "https://school-daze.fandom.com/wiki/Sheen?oldid=2760"
Community content is available under CC-BY-SA unless otherwise noted.