Thanks, But No Giving!
Sabrina Marquez, is Diego, Alicia & Daisy's gorgeous mother who appeared on Go, Diego, Go!. She is the Aunt of Dora, Isabella, and Guillermo. She also made a few appearances in Dora the Explorer and School Daze.

Just like her husband Nico, Sabrina has phrases that encourage her son, such as "No hay que darse por vencido" (You must never give up) and "Nada puede separar a la familia" (Nothing can keep family apart). She appears to love Nico a lot because she almost always has her hands on her husband. Sabrina really loves Diego and encourages her son on his animal rescues. The two worked together in a fierce animal rescue in Fiercest Animals. She's voiced by Olga Merediz (only in Diego Saves Baby Humpback Whale) and Karen June Sanchez in all her other appearances in Go Diego Go. She’s voiced by Janet Parker in the School Daze series.

In Dora the Explorer, she wore a purple t-shirt with a dark purple trim, magenta capris, and matching slippers.

In the Virtual Paradise and the Dog-Daze series, she wore a tan coat under a yellow blouse, green cargo capris, and yellow sandals.

In the Live-Action film, she wears sleeveless blouses with skirts or a simple dress.

In Senior Year, Sabrina wears her tan vest over a yellow short-sleeved dress shirt, a black belt with a gold buckle, green Bermuda shorts, and the same shoes.

Sabrina has appeared in several episodes of Go Diego Go and Dora the Explorer. In School Daze, She appeared in: 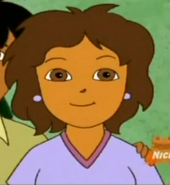 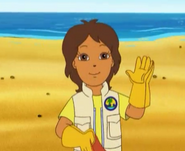 Add a photo to this gallery
Retrieved from "https://school-daze.fandom.com/wiki/Sabrina?oldid=8135"
Community content is available under CC-BY-SA unless otherwise noted.