Leader of the PAW Patrol

Ni Hao to the PAW Patrol

Ryder is a ten-year-old boy and the main protagonist of the TV series, PAW Patrol. He is the 1st member of the PAW Patroland is the team's leader.

Ryder is very intelligent. He has trained each of the puppies for their own specific work (for example, Marshall as a firefighter dog, Chase as a police dog, etc.), and he has invented all the devices used by the PAC Patrol team. I have even taught each puppy to use their own gadgets. During an emergency, Ryder knows the solutions to each problem and also knows which puppies are needed in each mission. During missions, Ryder is seen in all episodes as very calm and serene. He is also very mature, patient and friendly, which gives him the confidence and loyalty of all the puppies, and this makes him a good leader of the PAW Patrol. Although Ryder is mature, he is still a child, and sometimes, he can be playful and childish at times. He also helps Caillou rescue Stewie from a Maximum Security Prison in Advanced Education, along with Brian, Little Bill, and Kai-Lan.

Ryder has fair skin, gelled up dark brown hair, and brown eyes. He wears a red, white, yellow, and blue vest, which contains the PAW Patrol logo, that covers a white long-sleeved shirt. He also wears blue jeans and has blue and white shoes. He is not as tall as the adult characters. In Advanced Education, his appearance pretty much stays the same, since he hasn't really aged. 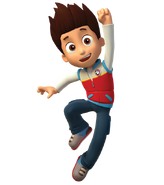 Add a photo to this gallery
Retrieved from "https://school-daze.fandom.com/wiki/Ryder?oldid=4051"
Community content is available under CC-BY-SA unless otherwise noted.