Rosie Tollar, is Caillou's adorable and very beautiful 8 year old little sister. In the French novels by Christine L'Heureux that the show is based on, her name is Moussline. She is also the daughter of Boris and Doris. 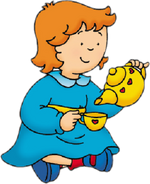 Add a photo to this gallery
Retrieved from "https://school-daze.fandom.com/wiki/Rosie?oldid=6208"
Community content is available under CC-BY-SA unless otherwise noted.