Richard Nicholas Nabavi, also known as "Rick" is a main character in the show School Daze. He is a friend of Tom from School. He’s basically the bad-boy of the group. He is also a troublemaker. Willy dislikes Rick because he “stole his thunder”. He first appeared in the episode “Welcome to the 8th Grade”, and he’s been appearing constantly ever since.

Rick is basically the bad-boy of the group. At the start of Season 11, Brilee became his girlfriend, until her sudden disappearance in The School Daze Spooktacular Movie. In Season 15, Rick reveals that Brilee was in the hospital. She returns in the Season 16 episode “Return of Brilee”, only to dump him a Season later, they have been in a bad relationship ever since. He is also shown to have anger issues, like, for example, he would often yell at other students for insulting him, his girlfriend, or his friends. He really hates when people call him "Nickelodeon", and gets upset whenever they do. Rick also dislikes Willy greatly, and would often insult him whenever he was annoying, or for the fun of it. In “Simpsons Guy 4: The Pokemon Daze”, he swore at the whole class for insulting him, which resulted in him getting suspended, and because of this, he was absent for the rest of the movie until the very end. He would often act as the Voice of Reason on a few occasions. He has a brother named Jared, whose last name is Bullish, so it is unknown if one of the brothers is adopted or if they are step-brothers. However, in one episode, when Willy jokingly says that Rick is adopted, Rick got angry and told him otherwise. When on the bus, Rick enjoys listening to music and singing along to the songs he's listening to very poorly, much to the annoyance of his peers.

Rick has fair skin, blue eyes, and curly blonde hair. Despite being tall and slender, he is shown to be shorter than Daniel. His outfits vary throughout the series, but he is mostly seen in 12 main outfits.

In the 8th Grade Adventures Series, he wore a dark gray hooded jacket, an orange long-sleeved undershirt, blue jeans, and black sneakers. He was also seen wearing these other 2 outfits:

In The High School Years series, He wears a new gray jacket with lighter gray sleeves, a purple short-sleeved undershirt, black sweatpants, and red sneakers. He was also seen wearing these other 2 outfits:

In the Forever Sophomores series, his outfit changed again. His new outfit consists of a black hooded jacket, a red short-sleeved undershirt, khaki cargo pants, and white sneakers. He is also seen wearing:

In the Animas Extravaganza series, he wears the standard red and white Santa hat, a navy blue varsity jacket with white sleeves(which he received in the 30th Anniversary Special), an orange short-sleeved undershirt, blue jeans, and the same white sneakers.

After Animas Extravaganza ended, he begins wearing a different set of attire. He keeps his black jacket, but underneath it, he wears his original gray jacket from 8th Grade Adventures. He often takes those off when in class. He also wears a blue t-shirt under the jackets, greenish-gray trousers, and the same white sneakers. His shirt and pants are often seen in different colors. Sometimes, he would wear his varsity jacket from Animas Extravaganza with this outfit.

Starting with Season 36, Rick switches to a thinner black hooded jacket with neon green on the inside, the same blue undershirt, and reddish-orange shorts with gray highlights. His shirt and shorts are often seen in different colors. He still wears white sneakers, but when he prepares for track, he switches to a black pair of sneakers with green and orange accents. On one occasion, he wore his red sneakers from High School Years.

When the class photo was taken prior to the Forever Sophomores finale, He wore an orange t-shirt, black shorts with white highlights, and his white sneakers.

Rick is shown wearing 3 outfits throughout the Forever Sophomores finale. All of the outfits he wore are listed below:

In Advanced Education, Rick wears a black t-shirt that reads: “PLAY HARD, SHUFFLE HARDER” in black and white, black shorts, white ankle-length socks and black sneakers with white soles. This outfit is often seen in different colors. Sometimes, his shirt either has a different symbol on it, or it's left plain. Starting with "Toys to Fenway", he wears his black hooded jacket from Forever Sophomores with this outfit. In the Season 1 finale, Rick's outfit stays the same, but his black shirt lacks the “PLAY HARD, SHUFFLE HARDER” writing on it, and the back of the shirt is red.

In the promotional artwork, Rick was seen wearing his black and green hooded jacket from the final season of Forever Sophomores, a yellow short-sleeved undershirt, his blue jeans from 8th Grade Adventures and Animas Extravaganza, and blue New-Balance sneakers.

In Season 2-9, Rick wears the same black jacket over either a blue hoodie or another black jacket, a short-sleeved undershirt of varying colors(usually white, black, orange, green, blue, red, or other colors) and black sweatpants(sometimes blue jeans, khaki cargo pants, or greenish-gray trousers). He retained his black sneakers for a majority of the series, up until Season 6, where he switches back to his old red sneakers from the High School Years series. Sometimes, he wears a black cap.

In Season 10 of Advanced Education, Rick wears his black hooded jacket over a t-shirt of varying colors(usually black, orange, green, blue, purple, red, white, tie-dye, or other colors), along with black, blue, or orange athletic shorts, white socks, and his red sneakers.

During the Advanced Education finale, Rick wears 5 different outfits. Each one is listed below:

In Senior Year, Rick's main outfit consists of a blue t-shirt with a silver necklace, blue shorts with green stripes on the cuffs, black socks, and blue sneakers. He would also be seen wearing a t-shirt with athletic shorts(and sometimes his black jacket) in warm weather, and a hooded jacket with an undershirt and jeans or athletic pants(sometimes cargo pants) in cold weather. On his feet, he wears either his current blue sneakers or his old red ones. His clothing is normally seen in the colors black, blue, red, gray, brown, yellow, green, purple, white, or orange.

Rick was born to Carolyn and Thomas Bullish on August 7, 2001 in Brockton at 3:25pm. It is unknown why he has a different last name from his parents. When he was born, he had a hip dysplasia. His aunts suggested his name. Rick spent most of his childhood in Norton, and everyone knew him as "The King of Norton". During his time in Norton, he had a friend named Annie, who was tragically killed in a car accident. Rick was always there for her, he would protect her from bullies or cheer her up when she was down. Rick eventually moved to Franklin after beating up a friend of his brother's. The mother threatened to call the cops on him, so they had to move immediately. He made a lot of friends in the 8th Grade, and he is currently trying to become popular in High School. In Freshman and Sophomore year, the only class Rick only ever had with Tom and co. was in Essentials to Literacy, though there were times where he was temporarily in their other classes(such as Biology, Marine Science, and Art), but he often switched out of those after the first month of the year. Despite that, he stayed in Literacy. In Junior Year, he didn't have any classes with Tom and co., but they did have Unified Track together. In Senior Year, he was in their Transitions class, and also attended Unified Basketball. Rick was on the bus with Tom and co. for most of the series.

Rick likes many of the characters, the only exceptions would be Eddy and Evan. Rick hates them because they would often torment him, which would always result in him getting angry and visiting the counselor. 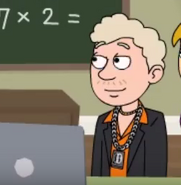 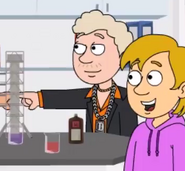 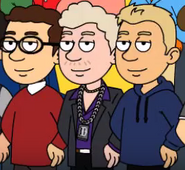 Nick standing between Domenic and Ethan 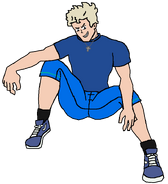