Rex is a green, plastic Tyrannosaurus Rex toy originally belonging to Andy Davis (and now Bonnie), and one of the supporting characters in the Disney/Pixar Toy Story movies.

Ironically, despite being portrayed as a ferocious Tyrannosaurus Rex, Rex is gentle, kind, caring, and hates any kind of argument or confrontation. He also lacks some intelligence and is extremely trusting and carefree. His greatest fear is that he will be replaced or abandoned, but he is usually enthusiastic about anything and everything. With his childlike demeanor and lack of self-confidence, Rex is the most innocent of all the toys and shows the greatest desire to be loved and played with. He also has a fear of other dinosaurs, but he eventually overcomes this.

In the beginning of the film, Rex attempts to try out his roar to scare Woody after luring him there by stealing his notepad. He learns to his dismay that the roar he emitted did not scare Woody (though Woody said that he was close to being scared), and in fact, it actually came off as annoying. He is also shocked along with the toys when he learns that Andy's "birthday" was moved from the Wednesday of the following week to the current day, and expresses fear of his being replaced, especially if it was another carnivore-based dinosaur toy as he wouldn't take that rejection well. When the surprise present is unveiled to the kids and Sarge reports it, but is unable to ascertain the identity of the present, Rex ends up inadvertently wrecking the baby monitor due to his shaking the bedside table due to impatiently wanting to know the identity of the surprise present, which earns him a good reprimand from Mr. Potato Head and Hamm for his anxiety getting the better of him. When Buzz Lightyear first came to Andy's room, he was just as amazed by him as all the other toys (as well as greatly relieved that Buzz wasn't another dinosaur) and even managed to become more fierce with his roar thanks to Buzz.

Rex tries to avoid confronting Woody when he is accused of trying to jealously kill Buzz (although mostly because he doesn't want confrontation from either side), but slowly and reluctantly turns against him under peer pressure after Woody accidentally exposed Buzz's severed arm, quickly experiencing guilt later on when Bo Peep sees Woody with Buzz on RC and causes the toys to realize their mistake, to their horror and remorse. He is known to have a queasy stomach and actually "barfed" when he saw Buzz's severed arm.

By the end of the film, he seems to have gained confidence throughout the movies, expressing hope that Andy will receive a leaf-eating dinosaur for Christmas that Rex can play with and intimidate.

Rex has a larger role in the second film. He is first seen playing the Buzz Lightyear: Attack on Zurg video game, which terminates with Buzz being destroyed by Emperor Zurg, much to Rex's frustration and Buzz's disappointment, who says that Rex almost had it and that he should be a better Buzz than he is. Rex later inadvertently destroys the toys' presentation of Woody's kidnapping after he is stolen by Al McWhiggin of Al's Toy Barn. He is then seen channel-hopping in an attempt to find Al's Toy Barn commercial, but Hamm eventually takes over, doing it far more rapidly.

Thinking he is prepared with his video game experiences, Rex accompanies Buzz, Potato Head, Hamm, and Slinky on their mission to rescue Woody. After the toys enter Al's Toy Barn, Rex excitedly finds a "Buzz Lightyear" video game strategy guide. He is later heard talking incessantly about the guidebook to Potato Head, much to the latter's annoyance. While riding with the other toys in a convertible, Rex blocks Tour Guide Barbie's view with the guidebook, causing the car to crash into a gumball machine and losing the guidebook as a result. Unable to retrieve it, Rex catches up with the moving car and falls in headfirst. He later attracts Buzz #2 (unaware he wasn't Andy's Buzz) with his claim of knowing how to defeat Zurg.

Rex is considered to be the heaviest of Andy's toys when he loses his grip on the new Buzz's utility belt grappling hook and pushes the toys to the bottom, causing the new Buzz's strength to give out. Later, Buzz #2 and the toys use Rex's head as a battering ram to break into Al's apartment. When the toys later go down the elevator after Al leaves the room with Woody and the Roundup gang, Rex witnesses the duel between Buzz #2 and an Emperor Zurg action figure. Just as Zurg is about to finish Buzz #2 off (at point blank range), Rex turns away, not bearing to look anymore, but his tail lashes out and knocks Zurg down the elevator shaft, making him feel overjoyed about finally defeating Zurg.

At the end of the film when Hamm is playing the video game, he asks Rex for help, but Rex proudly replies, "I don't need to play; I've lived it!"

In a blooper, the toys use him as a battering ram, only for Rex to hurt his head when banged against the locked grate.

Rex returns in the third film, as he eagerly awaits the opportunity to finally get played with by children again. Years later, Andy is 17 years old, and Rex, like the other toys, wishes so much to be played with that he even gets excited when Andy picks him up. The toys are accidentally almost thrown away by Andy's mom, thinking that they are trash. Rex was responsible for saving the toys lives with his pointy tail to split open the trash bag. With them believing that they are just junk to Andy now, they decide to sneak into a box bound for Sunnyside Daycare.

Once at Sunnyside, they are welcomed by the other toys that reside there, led by Lotso, the strawberry-scented bear (as remarked by Rex), who show that Sunnyside is a paradise for toys where you will be played with by generations and generations of kids. The toys there take Rex and the others to the Caterpillar Room, telling them that they will soon be played with by children. When the kids are returning to the room, Rex eagerly waits in front of the door, excited that he is finally going to get some play time. However, when the kids enter, it is discovered that they are very little children who have no regard for treating a toy right, even breaking off Rex's tail. When the toys try to complain to Lotso, it is revealed that they were sent to the Caterpillar Room to be beaten up by the toddlers on purpose and that you have to earn joining the Butterfly Room. Lotso even reprograms Buzz so that he is back to being a senseless astronaut who keeps Rex and the toys in shelved baskets (which function as prison cells).

The next day, following another rough playtime with the toddlers, Woody returns to Sunnyside, and Rex and the other toys are elated to see him again. Woody then formulates an elaborate plan to help the toys escape Sunnyside and make it back to Andy. That night, Rex and Hamm distract Buzz by staging a little fight, and when Buzz attempts to break off the fight, Jessie calls to him and entraps Buzz in a plastic storage bin, then Rex and Hamm immediately jump onto the bin prevent his escape. However, Buzz breaks himself free, and Rex and Hamm tackle him down from the side to prevent him from escaping. In order to reset Buzz, Woody has Rex insert his finger into a tiny hole below the switch, which causes Buzz to shut down for a brief second, then spring back to life in his Spanish deluded version. After a series of attempts and planning, the toys finally escape Sunnyside through the trash chute but are confronted by Lotso, who had "broken" Chatter into informing him of the escape plan, along with several of his henchmen. Woody, having been informed of Lotso's past, brings up the subject of Daisy, making Big Baby (and by extent the other Sunnyside toys) turn on Lotso.

After Big Baby throws Lotso in the chute, an alien's feet was stuck in the lid. Woody goes in to help, but Lotso grabs him and puts him inside the trash chute. Rex and the toys follow to save him. Rex was the last one to get a metal object and hung onto a fan. When approaching the incinerator a few feet away from where they were, Rex mistakes it for daylight. Woody points out that it wasn't daylight, and it turns out it was fire. Rex was horrified when Lotso left him to die in the incinerator. He was desperate from being burned to flames and held Hamm and Potato Head's hand when they thought they were about to die. But they got rescued by the Aliens.

When the toys make their way back home, they clean themselves of the dirt and grime that had made its way onto them during their escape. The toys aside Woody climb into a box bound for attic and they toys say goodbye to him; Rex tells Woody to take care of Andy. However, Woody decides that the toys deserve a better place than the attic so he writes to Andy to donate the toys to Bonnie Anderson. Andy arrives at Bonnie's house and gives his toys to her; when he shows Rex to Bonnie, he makes roaring sounds as if Rex is roaring, making her recoil initially, but she chuckles as she notices that it's just a toy and takes Rex.

After Andy leaves, Rex is briefly seen talking to Trixie, becoming close friends with her, as further shown in the film credits when the two dinosaur toys are seen playing a game on a computer together. Their cooperation pays off as they help each other reach the end of the game, then Trixie reaches her paws out to catch Rex's tiny arms in a high-five. Finally, Rex and Trixie are seen side by side as the toys enjoy watching Buzz and Jessie perform a pasodoble to "Hay Un Amigo En Mi" (the Spanish version of "You've Got a Friend in Me").

Rex appeared once more in the latest installment of the franchise. He went on a road trip with his friends. 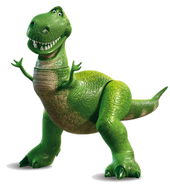 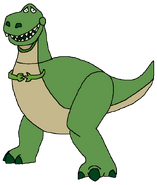 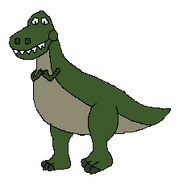 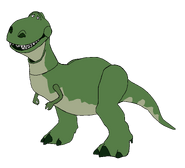 Add a photo to this gallery
Retrieved from "https://school-daze.fandom.com/wiki/Rex?oldid=6221"
Community content is available under CC-BY-SA unless otherwise noted.