Peter Griffin (born Justin Peter Griffin) is an obnoxious, boisterous man who lives in Quahog and the main character of Family Guy. He has made many cameo appearances in The Simpsons and School Daze, most notably, a full appearance in the crossover episode, "The Simpsons Guy". He served as one of the major antagonists of the Animas Extravaganza series. He is voiced by Seth MacFarlane.

Peter Griffin is a fat, overweight guy. He has short cut brown hair and a big fat head which has become one with his neck. He has big, round eyes and a round nose, and a big mouth. His chin has a very large and deep cleft in it, making the rest of his chin very big and rounded. He wears glasses which are very thin and are the exact same shape and size as his eyeballs, making them pretty invisible at most times. He wears a white buttoned shirt with a collar and slightly rolled up sleeves. He also has green pants and a black belt with a golden buckle. He also has dark brown shoes.

In School Daze, Peter would sometimes change his outfit, often wearing a dress shirt, sweater, or t-shirt of varying colors(usually white, blue, black, gray, or other colors) with black trousers or shorts(sometimes white, blue, gray, or red), and either dress shoes or sneakers for footwear. During cold weather, he would always wear a black or gray winter jacket.

Peter is rude, short-tempered, immature, idiotic, selfish, violent, sexist, racist, adultist, humanist, and has anti-Semitic tendencies. He has shot his daughter, Meg Griffin. He killed his adoptive father, Francis Griffin (although unintentionally because he was drunk...wait, isn't he always drunk?) and has struck and cheated on his wife Lois on multiple occasions. He is best friends with his neighbors, Glenn Quagmire, Cleveland Brown, and Joe Swanson. 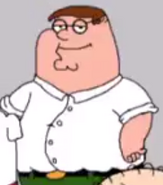 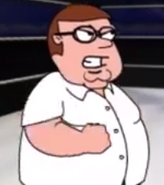 Add a photo to this gallery
Retrieved from "https://school-daze.fandom.com/wiki/Peter_Griffin?oldid=4566"
Community content is available under CC-BY-SA unless otherwise noted.