Time Rupture 3: Road to Wampanoag
Patrick is the deuteragonist in the show Spongebob Squarepants, the central protagonist in Metal of Trust, and one of the 4 protagonists of Adventure Sponge. He is Spongebob's best friend. Patrick is a naive and overweight sea star.

He used to go to Robinson Middle School with Tom Connelly, but he dropped out due to Ms. Baker's verbal abuse. He was voiced by Bill Fagerbakke in the Spongebob series, and Joe Nesto in Metal of Trust, Quest for an Xbox, and the School Daze series.

Patrick is an overweight, coral-pink starfish with a pointy head, thick eyebrows, and red dots across in his body. His eyebrows were black and shaped like the letter Z. Patrick is shown to have either a full set of teeth, a single tooth, or sometimes none at all. His eyes are simple black dots and are addressed by such on his driver's license, along with purple eyelids. He usually wears lime green swimming trunks with lavender flowers on them.

When attending Robinson Middle School, he would wear a t-shirt or polo of varying colors, usually red, light blue, green, lavender, or gray with his usual lime green swimming trunks.

In the alternate timeline, he wore a purple, pink, and turquoise striped t-shirt with a black border and yellow sleeves, as well as his green trunks and blue and pink sneakers.

Patrick's portrayal is pleasant, overweight, lazy, unmannerly, unintelligent, friendly, helpful, and generally ignorant, even with either performing unintended act of malice or dangers around him. His personality may be based on the deadly sin of Sloth, which is the sin of being lazy and having little to no motivation.

Despite this however, Patrick does appear to have anger problems and his ignorance can result in him unintentionally (and sometimes purposely) cause problems and even harm to others around him. He dislikes being called tubby.

In 6th Grade, Patrick is shown to be very miserable, that's because he took verbal abuse from Ms. Baker and most of his classmates. This eventually drove him to drop out of school.

When an evil organization attacked Bikini Bottom, they chose Patrick to spend 7 Years in Middle School and High School to save the town. There, Patrick meets Tom, David, Willy, and Reynaldo, who were his only friends. He was constantly nagged and punished by his teacher Ms. Baker. She was mean to all of her students, causing their parents to hate her. Eventually, he finds out that Scott Tenorman set it all up. They agreed to have a swim race to decide whether Patrick should leave school, or stay. Patrick won the bet, and Scott tried to kill him in frustration, causing him to be sent to hell. Afterwards, Patrick dropped out of Middle School for good, forcing Trent Boyett to take his place. After that, He made a few minor appearances in the series.

In “Gathering the Aquatic Heroes”, he joined Tom and the gang as they were going to An Unlikely Story, where they read a few books and listened to people sing. During the Uncle Funtime 4 Arc, he joined the gang on a trip to New York City, as well as getting kidnapped by Team Rocket afterwards. He was eventually rescued by his friends.

In “Ronny’s Not A Fan”, he, along with Finn and Spongebob, went to Westwood to warn Michael and Uncle Jerry that Ronny was planning to kill them. They then stayed with the gang for the rest of the day, as Ronny was chewing Michael out for neglecting him before the two eventually reconciled.

In “Paddle to the Green”, he doesn’t join Finn and Jake on their mission, as he is already on a road-trip to the surface with Patrick. However, he does appear at the very end of the episode, as he is seen partying while Finn and Jake give Spongebob his birthday present.

An alternate version of Patrick appears in the Senior Year episode "Time Rupture 3: Road to Wampanoag", Where Alex enters an alternate timeline and meets him. In the alternate timeline, Patrick stayed in School with Tom, as Annabelle was able to get rid of Ms. Baker early in the year, along with his many bullies. He later joins Tom, Willy, Alex, David, and Daniel, as they all go to Warhammer together, and is present in the house fire that killed Rigby. 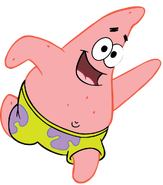 Add a photo to this gallery
Retrieved from "https://school-daze.fandom.com/wiki/Patrick?oldid=8052"
Community content is available under CC-BY-SA unless otherwise noted.