Nathan Redheart is a recurring character and former antagonist in the High School Years and Forever Sophomores series. He was Willy's former arch-rival, and he has been ever since he stole his popularity in "The Retard Bully". In Season 30, the two had a truce. He debuted in "High School Begins". He served as the central antagonist of the High School Years Series, a supporting character/anti-hero in Forever Sophomores, and a minor character in Advanced Education.

Nathan is a cool person, like most of his classmates. He used to have a rivalry with Willy in Freshman year, they often roasted each other and fought for their popularity in school, but things changed once Sophomore year hit. They had a truce in the 30th Season, and now the two are inseparable. In High School Years, he was in Tom and co.'s English and Video Production classes. In Forever Sophomores, he was in their Marine Science and Wellness classes. In the first 13 episodes of Advanced Education, he was in their Algebra II class, but switched to a different class prior to "Return of the Observation Assignment". He has been appearing in almost every episode since his debut in "High School Begins".

Nathan has fair skin, brown eyes, and brown hair. He is often seen wearing a gray and black hoodie with a long or short-sleeved undershirt of varying colors(usually black, white, maroon, blue, gray, or yellow)., black, white, or gray sweatpants or shorts(sometimes khakis), and navy blue sneakers. Starting at Season 23, his sneakers are black. In Forever Sophomores, he replaces his original hoodie with a blue(sometimes black) one.

In Advanced Education, he wears a light blue polo shirt with navy blue shorts and the same sneakers. He later switches to a darker gray hoodie with an undershirt of varying colors, and either sweatpants, khakis, or shorts. His sneakers are now gray. The hoodie is sometimes seen in different colors.

In Senior Year, he wears a long or short-sleeved shirt with or without a hoodie over it, sweatpants or shorts, and sneakers. His clothing is seen in the colors gray, black, blue, red, brown, or white. 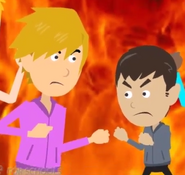 Add a photo to this gallery
Retrieved from "https://school-daze.fandom.com/wiki/Nathan_Redheart?oldid=6612"
Community content is available under CC-BY-SA unless otherwise noted.