Jim Runs a Tight Ship
Mary Robinson, was a main character appearing in the High School Years Series and Forever Sophomores Series. She is the teacher of Tom, Trent, Willy, and Caillou in Essentials to Literacy and World History. She is always willing to help her students get good grades. She debuted in the episode “High School Begins”, and she’s been appearing in almost every episode ever since.

Like Ms. Onamor, Ms. Robinson was a kind and caring person. She would always make sure that her students are working hard. She taught Essentials to Literacy and assisted Ms. Conlyn in teaching World History. Ms. Robinson was often irritated when her students (especially Bryce) are being inappropriate. She didn’t give out homework in her class, But she did assign projects once in a while. She appeared in almost every episode. She first appeared in the Season 18 episode “High School Begins”. She continued to teach Tom and co. in the Forever Sophomores Series. But in "Return to Fenway", Ms. Robinson revealed that she wouldn't be teaching at Fredord High next year, and that she would be moving back to her home state, in Missouri, causing Darryl to burst into tears. Because of this, Ms. Robinson will not return in the next School Daze series. However, she is mentioned a few times in the Hershey Park Arc from Oak House and Advanced Education. Near the end of the Advanced Education series, she returns to the school in order to watch the seniors graduate, but not before a a reunion with Tom and co. In Senior Year, she returns one last time in the episode "Jim Runs a Tight Ship", where she calls Tom and co. on a Google Meet in Ac. Support.

In Senior Year, she has curlier hair and wears a blue shirt. 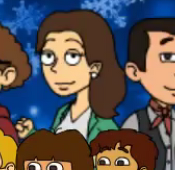 Add a photo to this gallery
Retrieved from "https://school-daze.fandom.com/wiki/Ms._Robinson?oldid=7850"
Community content is available under CC-BY-SA unless otherwise noted.