Ms. Onamor was a caring teacher, she was always willing to help out Tom & Trent with school projects. She was nice to all of her students, especially Eddy, even though he would constantly get on her nerves. Like many characters, Ms. Onamor is often shown as the Voice of Reason when it comes to disputes. She made her debut in the Spongebob short “Patrick joins a Club”, as the host of Lego Club. In School Daze, she was Tom & Trent’s Math teacher. She used to be their ELA teacher, until she moved them to Mr Kannenberg’s ELA class in “New ELA class”. She was aware of the living utensils, She constantly made note of this to Tom & Trent by saying they were “distracting”. She tried using methods to get rid of those “distractions”. Like, for example, she moved Herm-2’s Crib from Mr. Kannenberg’s room to her room, she then told Tom & Trent they can only bring 3 utensils to class shortly after. She made her final appearance in “School Daze: The Movie”.

When the School Daze series started, She wore a dark blue dress shirt, a red skirt, and dark cyan high-hells. 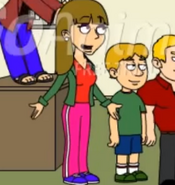 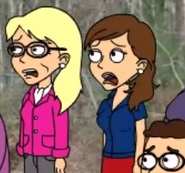 Current Artwork
Add a photo to this gallery
Retrieved from "https://school-daze.fandom.com/wiki/Ms._Onamor?oldid=1437"
Community content is available under CC-BY-SA unless otherwise noted.