2 Kahoots and a Paid Meal

Denise Nightlong, was a main character appearing in the 8th Grade Adventures Series. She was Tom & Trent’s ELA teacher from the 8th grade. She was a very nice person, and she was helpful as well. She would sometimes be a nag. She last appeared in “2 Kahoots and A Paid Meal”.

Ms. Nightlong was a very kind and caring person, though she was sometimes stubborn. She would sometimes help Tom and Trent with projects, such as the Video Project. She was good at teaching her students ELA, that was, until she retired. She appeared in almost every episode from Seasons 11-17 until “School Daze: The End”. However, she returns in “Simpsons Guy 4: The Pokemon Daze” as a substitute teacher. Since then, she started making cameo appearances in the series, up until “2 Kahoots and A Paid Meal”.

Ms. Nightlong’s outfits varied throughout the series, but she wore 2 main outfits. She has tan skin, blue eyes, and blonde hair. She also wears glasses.

In her debut in Season 11, she wore a pink jacket with a white undershirt, gray pants, and black shoes.

When she returned in “Simpsons Guy 4: The Pokemon Daze”, she wore a different outfit, consisting of a black and white striped dress, a black overcoat, and black shoes. This is her current outfit. 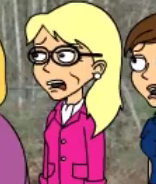 Add a photo to this gallery
Retrieved from "https://school-daze.fandom.com/wiki/Ms._Nightlong?oldid=7320"
Community content is available under CC-BY-SA unless otherwise noted.