A Double Movie In School! Must Finish the Desalination Slideshow!

Carolyn Keaton was a recurring character appearing in the Forever Sophomores Series. She was Ms. Gritz's assistant in Tom, Trent, Willy, and Caillou's English class for the first 3 Seasons of Forever Sophomores, but in "The School Daze 30th Anniversary Special", she reveals that she was assigned to teach another class, much to her students' dismay. She first appeared in "Midterm Gaming".

Ms. Keaton was very nice and helpful. She would always help Tom and the gang with English projects, classwork, and even homework. In the High School Years series, she did some testing with Tom and the gang, and she was also at their PTA meetings. In the Forever Sophomores Series, she took a more major role, as a Special Ed. teacher in Ms. Gritz's class. This only lasted for the first 3 Seasons of Forever Sophomores, because in "The School Daze 30th Anniversary Special", she announced that the staff switched her to a different class, making that episode her final appearance. She is replaced by Mr. Logan. In the Animas Extravaganza episode "A Double Movie In School! Must Finish the Desalination Slideshow!", she returns to Ms. Gritz's class for a little visit.

Ms. Keaton has fair skin, brown eyes, and brown hair. Her outfits vary throughout the series, but she is mostly seen in 3 outfits.

In the High School Years series, she had short hair and wore a light gray turtleneck sweater, black trousers, and black high-heels.

In the Forever Sophomores series, she gets a complete makeover. her hair is longer and has shades of blonde on it. She now wears a black hooded jacket with a white short-sleeved undershirt, a magenta plaid skirt, and beige sandals. 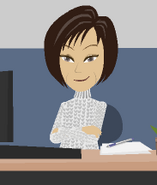 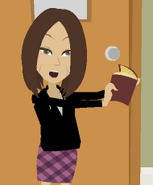 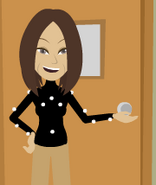 Add a photo to this gallery
Retrieved from "https://school-daze.fandom.com/wiki/Ms._Keaton?oldid=3209"
Community content is available under CC-BY-SA unless otherwise noted.