The Learning Continues
Heidi Kurakkā, formerly known as Ms. Johnson, is a recurring character and minor antagonist appearing in the Forever Sophomores series. She is Mrs. Parson's assistant and later main teacher in Tom, Trent, Willy, and Caillou's Marine Science class. She has been appearing in almost every episode since "The Learning Continues".

Ms. Kurakkā is very kind and helpful. She often helps her students with classwork. She often acts very strict whenever one of her students goof around. She also hates when Tom and his friends are sitting together because it was "distracting", and would often try to separate them, but she gave up after a while. Ms. Kurakkā became Tom and the gang's main Marine Science teacher, since Mrs. Parson left to take care of her baby. She has stated that every teacher she assists gets pregnant. In "The New Parson", she replaced her with Ms. Kinzoku, and later Ms. Kazaguruma. She debuted in "The Learning Continues". She makes a few appearances in the hallway in Advanced Education.

Ms. Kurakkā has fair skin, blue eyes, and brown hair. Her outfits vary throughout the series(consisting of a sweater or blouse with jeans[or trousers] and sometimes a coat), but she is mostly seen in 3 outfits.

In the Forever Sophomores series, her usual attire consisted of a light turquoise sweater, blue jeans, and light brown sandals. This outfit is usually seen in different colors.

Her outfit during "The Weirdness War" consists of a gray coat over a green sleeveless blouse, khaki pants, the same sandals, and a white watch.

In Advanced Education, she can be seen wearing a white and red striped shoulder-less blouse with short sleeves, the same khaki pants from the Wierdness War, and red sandals.

In Senior Year, she wears a white long-sleeved blouse with small black dots all over it, black trousers, and black sandals with white straps, along with other outfits. 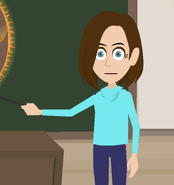 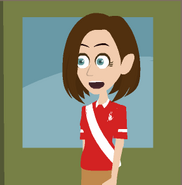 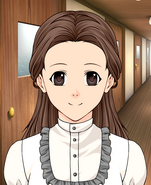 Add a photo to this gallery
Retrieved from "https://school-daze.fandom.com/wiki/Ms._Johnson?oldid=6462"
Community content is available under CC-BY-SA unless otherwise noted.