Escape to Reality Part 1: The End of Virtual Learning
Mrs. Hizamazuku is a recurring character in Advanced Education and Senior Year. She is the assistant of Mrs. Collins in Tom, Trent, Willy, Bonnie, and Mason's Algebra II class. She debuted in "Column Column Notes Notes".

Mrs. Hizamazuku is very helpful. She often helps Tom and the gang with Homework or Classwork. In her debut, she is shown to be easily irritated whenever her students would goof off instead of following directions. She is also willing to help out any student that is struggling with any of the math subjects, especially Tom and the gang, while Mrs. Collins, on the other hand, would just make them try it on their own. Unlike most of the teachers, she didn't make her first appearance in the first 3 episodes of the series due to the fact that she was in training. However, she eventually debuted in "Column Column Notes Notes". Her final appearance was in "Escape to Reality Part 1: The End of Virtual Learning".

Mrs. Hizamazuku has fair skin, blue eyes, and blonde hair. She also sports glasses. Her outfits vary throughout the series, but she is mostly seen wearing a black short-sleeved dress with a white square pattern on it. She also wears a black blazer over the dress. on her feet, she wears black sandals. This outfit is often seen in different colors. She can also be seen wearing dark-colored tunics, sweaters, or button-ups(which are seen in the colors, black, red, blue, gray, or other colors), leggings or trousers, and either boots, flats, slip-ons, or high-heels for footwear.

During the Advanced Education finale, Ms. Hizamazuku wears 3 different outfits. Each one is listed below:

In Senior Year, her main outfit remains unchanged from the previous series, but with the addition of a silver necklace. Other than that, she is also seen wearing sweaters, tunics, or blouses with leggings or trousers. She occasionally wears dresses and would sometimes wear a coat with her outfits. On her feet, she would wear sandals, high-heels, flats, dress shoes, or boots. Her clothing is usually seen in the colors black, white, red, blue, beige, gray, yellow, or pink. 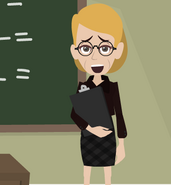 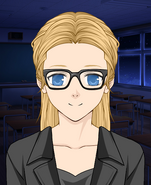 Add a photo to this gallery
Retrieved from "https://school-daze.fandom.com/wiki/Ms._Hizamazuku?oldid=7863"
Community content is available under CC-BY-SA unless otherwise noted.