The Battle for Freedom! It All Comes Down to This!

Kate Grits, was a main character appearing in the Forever Sophomores Series. She was the teacher of Tom, Trent, Willy, and Caillou in Englwash 10. She’s been appearing in almost every episode since “The Learning Continues”, up until her final appearance in "The Battle for Freedom! It All Comes Down to This!".

Ms. Gritz was a smart person. She knew a lot about literature and teaches her class with said knowledge. She also made them read books on occasion. She has also stated that she takes reading very seriously. Ms. Gritz was the first Sophomore teacher to hand out a Homework assignment, hinting that she might be the new Ms. Earlene. This was confirmed throughout the rest of Season 28, as she begins gives out homework every day. In "The Photo Problem", it was revealed that Mr. Grits, Tom's old counselor, was her father. She debuted in “The Learning Continues”. She made a few appearances in the hallway in Advanced Education. In HU006, Ms. Gritz reveals that she was moving to Vermont next year, making Advanced Education the last series she will appear in. After the aforementioned series ended, she moved away and was never seen again.

Ms. Gritzgerald had tan skin, brown eyes, and blonde hair. She sometimes wore glasses. Her outfits varied throughout the series, but she was mostly seen in 2 main outfits

In the Forever Sophomores series, she mainly wore a black short-sleeved dress with white stripes, a white scarf, and black high-heels.

Sometimes, she would wear a long or short-sleeved blouse of varying colors(mostly purple, pink, white, blue, or other colors) and black(sometimes blue) jeans or multi-colored trousers(usually red or purple).

In "The Weirdness War", she wore a black jacket over a sea green and beige blouse with a pink and purple floral pattern, dark blue jeans, and brown sandals.

In the Advanced Education series, she wore a red and black vertically-striped dress with short sleeves and light brown sandals, along with other outfits. 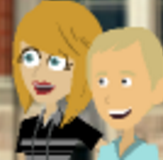 Add a photo to this gallery
Retrieved from "https://school-daze.fandom.com/wiki/Ms._Gritz?oldid=7312"
Community content is available under CC-BY-SA unless otherwise noted.