A Bust in Quizzes

Janet Earlene, was a main character appearing in the High School Years Series and the main antagonist of "Simpsons Guy 4: The Pokemon Daze". She was the teacher of Tom, Trent, Willy, and Caillou in Algebra. She taught her class about Algebra. She debuted in the episode “Chillin’ with Algebra”, and she’s been appearing in almost every episode from Seasons 18-25, up until “The Final Frontier”.

Ms. Earlene was pretty friendly. She would always make sure that her students are working hard. She works at the School as an Algebra teacher. Ms. Earlene was known for giving out homework every day, which strongly irritates Trent. In “Simpsons Guy 4: The Pokemon Daze”, It is shown that Tom and the gang were failing Algebra, but they have been improving as the series progressed. She appeared in almost every episode from Seasons 18-25. She first appeared in the episode “Chillin’ with Algebra”, which is the Second episode of Season 18. Her final appearance was in the episode “The Final Frontier”. In Forever Sophomores, Ms. Earlene got pregnant, and later gave birth to a baby near the end of the series. She isn't seen in Advanced Education. It is likely that she went on a maternity leave, just like Mrs. Parson once did. This theory was confirmed in the 9th Season of this series, as she is currently on maternity leave, and presumably remained in that position in the Senior Year series, since she is not seen in that series either.

Ms. Earlene has tan skin, blue eyes, white earrings, and black hair. Her outfits varied throughout the series, but she was mostly seen with 2 outfits.

In the High School Years series, she wore a light gray jacket with a pink undershirt, blue jeans, and black shoes with white soles. 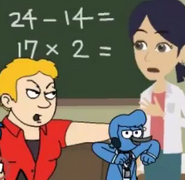 Add a photo to this gallery
Retrieved from "https://school-daze.fandom.com/wiki/Ms._Earlene?oldid=7313"
Community content is available under CC-BY-SA unless otherwise noted.