The Suburbs of Kentucky

Katy Conlyn, was a main character appearing in the High School Years Series. She was the teacher of Tom, Trent, Willy, and Caillou in World History. She taught her students about History. She debuted in School Daze: The Movie as a chaperone at High School Experience, and she’s been appearing in almost every episode up until “The Final Frontier”.

Ms. Conlyn was very helpful. Whenever Tom and the guys need help with classwork, Ms. Conlyn would always be there. She was a World History teacher, meaning that she taught her students about the past, just like Mr. Kannenberg and Ms. Albertson did. When she first appeared in “School Daze: The Movie”, She was Tom and the gang’s chaperone in High School Experience. Ms. Conlyn has been appearing in almost every episode since Season 17. She last appeared in “The Final Frontier”. She returns in “The Learning Continues”, and she’s been making cameos in the hallway ever since. In "Column Column Notes Notes", she runs into Tom and co. in the hallway, and informs them that Ms. Robinson is having a good time in Missouri. Her final appearance was in "The Suburbs of Kentucky".

Ms. Conlyn had tan skin, blue eyes, and blonde hair. Her outfits varied throughout the series, mainly consisting of sweaters or blouses with trousers(sometimes jeans) and either high-heels, flats, or sandals for footwear. She sometimes wears a coat. However, she was mostly seen in 4 main outfits.

In the High School Years series, she wore a white tank top, blue jeans, grey shoes, and a gold bracelet on each wrist.

In the Forever Sophomores series, she wears a periwinkle sweater, black trousers, and black slip-on shoes.

In the Advanced Education series, she wears a beige short-sleeved sweater-like blouse, the same black trousers, and black sandals.

In Senior Year, her main outfit is similar to what she wore in the High School Years series, but with black trousers instead of her jeans. 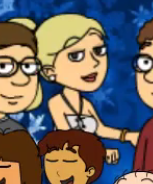 Add a photo to this gallery
Retrieved from "https://school-daze.fandom.com/wiki/Ms._Conlyn?oldid=7859"
Community content is available under CC-BY-SA unless otherwise noted.