Blue vs. White (cameo)
Brittany Ruben, is a main character appearing in the 8th Grade Adventures Series and the second half of Advanced Education. She was Tom & Trent’s math teacher from the 8th grade. She was a very nice person, but she was a nag sometimes. Mrs. Ruben has been Tom’s teacher from kindergarten to 6th grade, This was referenced on multiple occasions. She appeared in almost every episode of the School Daze from Seasons 11-17, She made her final appearance in “School Daze: The End”. She later returned in “A Scientific Reunion”.

Mrs. Ruben was a very kind and caring person, though she was sometimes stubborn. She was always willing to help Tom, Trent, and Willy with their school projects. Trent didn’t like Mrs. Ruben, that’s because she would constantly nag him for doing something wrong. Though Trent hated her, Rick seemed to be very fond of Mrs. Ruben. In a few episodes, Rick said that he wanted to be her assistant when he gets older. She made her final appearance in “School Daze: The End”. In “Weekend at Daniel’s” she appeared in a picture on Daniel’s phone. She returned to the series in the Pokemon: Franklin Expeditions episode “A Scientific Reunion”. She makes a cameo appearance in “Return of the Wimps (Part 4)”. She makes her official final appearance in School Daze 3: Marquez and the Orb of Life. In the Forever Sophomores series, she appears in a picture on Daniel's Autobiography. In the Advanced Education episode "The Utensils are Alive! Bernie and the 5 Stages of Grief!", she can be seen in a commercial-like skit in the Pie Day video made by the staff of Robinson Middle School. She appears again in HU016, as she attends the Unified Track meeting, and it's revealed that she will be one of the coaches. She worked as one of Tom and the gang.'s Unified Track coaches, up until the end of the 8th Season of Advanced Education, but attends the High School Graduation the following season. In Senior Year, she is seen watching Tom and the gang's first game in "Blue vs. White".

Mrs. Ruben had fair skin, blue eyes, and blonde hair. Sometimes, she was seen wearing glasses. Her outfits varied throughout the series, but she wore 2 main outfits.

In the 8th Grade Adventures series, she was mostly seen in one outfit, which consisted of a purple dress with a black jacket, black shoes, and a silver watch.

When she returned, her entire look changed. Her hair got shorter. She wore a navy blue jacket, a white undershirt with orange dots, a necklace with orange beads, black pants, and matching sandals. She had a pair of sunglasses in her hair. In her second appearance in this series, the third movie, and her Forever Sophomores cameo, she wore a teal dress with matching shoes and coat.

In the Pi Day video featured in HU013, Mrs. Ruben wears clothing similar to the outfit she wore in the 8th Grade Adventures series, but the lower part of her purple dress has a white and lavender floral pattern on it. In HU016, She wears a gray coat, a dark blue undershirt with a white pattern on it, black leggings, and black shoes.

In the first Track Meet, she wore a white coat over a pink t-shirt, black athletic pants, and white sneakers. For the rest of Advanced Education, she is usually seen wearing athletic attire, usually consisting of a t-shirt with or without a jacket over it, athletic shorts or pants, and a pair of sneakers. Her clothes are seen in the colors purple, pink, blue, black, white, red, or other colors. During Track Meets, she usually wore a gray Unified Track T-shirt with black or dark blue track pants, sneakers, and sometimes her white coat.

During the Senior graduation in her final Advanced Education appearance, she wore a white coat over a black dress, along with black high-heels.

During her cameo in the Senior Year episode "Blue vs. White", she wore a long green coat over a dark gray blouse with a pink floral pattern on it, a white undershirt, khaki pants, and brown high-heeled shoes. 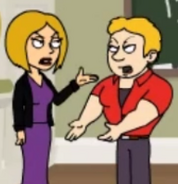 Add a photo to this gallery
Retrieved from "https://school-daze.fandom.com/wiki/Mrs._Ruben?oldid=8027"
Community content is available under CC-BY-SA unless otherwise noted.