Cassandra Parson, is a main character appearing in the Forever Sophomores Series. She is the teacher of Tom, Trent, Willy, and Caillou in Marine Science. She’s the second pregnant teacher with the first being Ms. Duncan. She’s been appearing in almost every episode since “The Learning Continues”.

Mrs. Parson is a smart person. She knows a lot about the ocean and teaches her class with said knowledge. However, that wouldn’t be the case for long, because after "Team Icebreakers", she would be leaving due to her pregnancy. However, she stuck around for a few episodes after that. She finally departed in " Planning a Review". She gave birth to a baby boy named Edward shortly after. She debuted in “The Learning Continues”. She was supposed to return after Animas Extravaganza, but in Season 32, Ms. Johnson reveals that she isn't coming back that year, making "Planning a Review" her final appearance. She makes a few appearances in the hallway in Advanced Education.

Mrs. Parson is a slender woman with tan skin, blue eyes, and dirty blonde hair(brown in the yearbook). Her outfits vary throughout the series, but she is mostly seen in 2 outfits. In Forever Sophomores, she was pregnant and wore a white sleeveless blouse with dark blue polka dots, black trousers, and black slip-on shoes. In Advanced Education, she wore a white coat over a khaki safari dress and the same shoes. 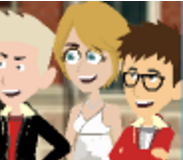 Add a photo to this gallery
Retrieved from "https://school-daze.fandom.com/wiki/Mrs._Parson?oldid=5112"
Community content is available under CC-BY-SA unless otherwise noted.