Escape to Reality Part 1: The End of Virtual Learning
Elizabeth Collins, is a main character and minor antagonist appearing in the Forever Sophomores, Advanced Education, and Senior Year Series, as well as the current tertiary antagonist of the overall series. She is the teacher of Tom, Trent, Willy, and Caillou in Geometry in Forever Sophomores. In Advanced Education and Senior Year, she returns as Tom, Trent, Willy, Bonnie, and Mason's Algebra II teacher. She’s been appearing in almost every episode since “Physically Geometric Artists”.

Mrs. Collins has tan skin, brown eyes, and dark brown hair. Her outfits vary throughout the series, but she is mostly seen in 2 different outfits.

In Forever Sophomores, she wore a navy blue sleeveless blouse with a black top underneath, white trousers with a gray pattern, light brown slip-on shoes with white soles, and a purple watch.

Her outfit during "The Weirdness War" consists of a brown sleeveless blouse with a beige and black polka-dot pattern, black capris, and black sandals.

In Advanced Education, she wears a red, white, blue, and orange striped blouse with black spots on it, light blue jeans with cuffs, and brown flats.

Sometimes, she would wear a long/short sleeved or sleeveless blouse of varying colors(usually beige, orange, black, white, blue, striped, or other colors), black capris or blue jeans(sometimes a different color), and her brown flats(sometimes sneakers, sandals, boots, or slip-ons). She would occasionally wear some sort of jacket, most commonly a green one.

During the Advanced Education finale, Mrs. Collins wears 3 different outfits. Each one is listed below:

Mrs. Collins’ main outfit consists of a white sleeveless blouse with tangerine-orange, dark blue, and pink horizontal stripes, as well as tangerine on the back. She also wears dark blue jeans and white sneakers. She can also be seen wearing sweaters or blouses with jeans(sometimes slacks), and either sneakers, flats, sandals, slip-ons, high-heels, or boots for footwear. She sometimes wears a coat. Her outfits are usually seen in the colors orange, blue, red, white, pink, green, black, gray, or brown.

Mrs. Collins is a smart person. She knows a lot about Geometry and teaches her class with said knowledge. Mrs. Collins is also shown to always be in a good mood, but she can get pretty strict when someone uses earbuds during a test or misbehaves during class. Like Ms. Earlene and Ms. Grits, she also gives out homework mostly every day. She, along with Mr. Schaft, have a couple antagonistic roles in the series. They mostly consist of the two giving Tom and co. a bad grade, and them having to try and improve it. They become supporting antagonists in "School Daze 4: Road to the Omniverse", as they give Tom and co. an F in Geometry, and they try whatever they can to improve it. The grade ends up improving, and the gang finishes up a quiz before meeting up with Ben's Team during February Vacation. In the Fairy World War Arc., she and Mr. Schaft not only give Tom and co. a D- in Geometry, but they also assign them large quantities of homework, making them major antagonists of said Story Arc, along with Tord, Vinny, Olivia, Mr. Crocker, and Vicky. She’s been appearing in almost every episode since her debut in “Physically Geometric Artists”. In Advanced Education & Senior Year, she is shown to be very strict towards the troublemakers in her class until they all switched out or moved away. She is also known to give out quizzes on a super frequent basis. After the Coronavirus hit, she has been teaching his class virtually until her final appearance in "Escape to Reality Part 1:The End of Virtual Learning". 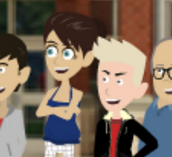 Add a photo to this gallery
Retrieved from "https://school-daze.fandom.com/wiki/Mrs._Collins?oldid=7852"
Community content is available under CC-BY-SA unless otherwise noted.