The Battle for Freedom! It All Comes Down to This!

Clyde Wadsworth was a minor antagonist appearing in the High School Years and Forever Sophomores Series. He is an adjustment counselor on the second floor of Fredford High School. He made his first appearance in "The Retard Bully", and last appeared in "The Battle for Freedom! It All Comes Down to This!" He served as the primary antagonist of the 2-Part episode "The Lecture".

Mr. Wadsworth is kind and caring towards his students, but he can be strict when they misbehave. Him and Willy have a bad history, because when they first met in "Health Survey", he caught Willy tickling Nathan Redheart. After lunch, he lectured Willy for tickling Nathan, and told him that he caught him doing that again, there would be consequences. However, he does find Willy's jokes funny, as shown in "Road to Boston". He has a major role in the 2-Part episode "The Lecture", as the main antagonist. After hearing from a witness that Willy beat up Andy with his backpack, Mr. Wadsworth called Willy and his friends down to his office to confront him for his violent actions. He eventually gets Ms. Daniels and Mr. Samson involved. As punishment, he puts them in an In-School Suspension for 2 days. Afterwards, Willy apologizes to Andy for beating him. In the Forever Sophomores series, he makes brief appearances in the hallways, and Willy tries not to act violent in front of him because him and his friends don't want to deal with any more "drama" with Mr. Wadsworth. In Senior Year, it is revealed that Mr. Wadsworth left and is now working at the Middle School.

Mr. Wadsworth has fair skin, blue eyes, and curly brown hair. His outfits vary throughout the series, but he is mostly seen in 2 outfits. his first outfit consists of a light brown cardigan with a white dress shirt underneath, blue jeans, and black dress shoes. His second outfit consists of a light blue dress shirt with rolled up sleeves, a red tie, a black belt with a silver buckle, khaki pants, and brown loafers. These outfits are usually seen in different colors. 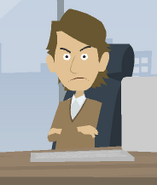 Add a photo to this gallery
Retrieved from "https://school-daze.fandom.com/wiki/Mr._Wadsworth?oldid=6639"
Community content is available under CC-BY-SA unless otherwise noted.