Larsson and the Power of One!

Jim Runs a Tight Ship
Brian Schaft, is a main character and a minor antagonist appearing in the Forever Sophomores and Advanced Education Series. He is the teacher of Tom, Trent, Willy, and Caillou in Academic Support and Geometry. In Seasons 18-25, he made cameos in the hallway, was mentioned by Ms. Robinson, and even visited her classroom on a few occasions. In the second half of Advanced Education, he once again became their Academic Support teacher. He’s been appearing in almost every episode since “The Learning Continues”.

Mr. Schaft has tan skin and brown eyes. He is bald with gray hair on the sides. He also sports glasses. His outfits vary throughout the series, usually consisting of a dress shirt or polo with trousers and dress shoes. However, he is mostly seen in 4 different outfits.

In the High School Years series, he wore a gray polo shirt, a black belt with a silver buckle, blue jeans, and black formal shoes. In his debut and Franklin Expeditions, his polo was replaced by a white checkered dress shirt with long sleeves.

In the Forever Sophomores series, he wore a blue polo shirt, a brown belt with a silver buckle, khaki pants, and brown loafers. This outfit is often seen in different colors. Sometimes, he wears a checkered dress shirt instead of a polo.

In the Advanced Education series, He wears a light gray t-shirt with "Panda Pride" written on it in dark blue and all caps, navy blue trousers, and black dress shoes. This outfit is often seen in different colors.

In the second half of the series, he began wearing polos or dress shirts (usually colored blue, black, white, maroon, gray, striped, checkered, or other colors), along with blue jeans or khakis(sometimes dark-colored trousers) held up by a belt, as well as formal shoes(sometimes sneakers).

In Senior Year, his main outfit consists of a dark blue and white striped polo shirt, a black belt with a silver buckle, blue jeans, and gray sneakers. This outfit is often seen in different colors. He sometimes wears a button-down shirt with slacks and formal shoes.

In the High School Years series, Mr. Schaft was described by Ms. Robinson as a slob. In one episode of the Christmas Chronicles series, she reveals that his desk is really messy. She then tells her students to come up with ideas to prank him in their journals. Ms. Robinson eventually decides to prank him with gnomes, which Mr. Schaft is terrified of. In Larsson and the Power of One, he is sown to be strict. For example, When Tom and his friends were in a small group room taking a biology test, Mr. Schaft and his students were taking a geometry test in there as well. He was seen scolding another student for refusing to do any work. In the Forever Sophomores series, he is shown to be calmer. In the first episode of said series, he reveals that he’s been working as a Special Ed. Teacher for 30 years. He often argues with the biggest troublemakers in his class, even roasting them on occasion. He, along with Mrs. Collins, have a couple antagonistic roles in the series. They mostly consist of the two giving Tom and co. a bad grade, and them having to try and improve it. They become supporting antagonists in "School Daze 4: Road to the Omniverse", as they give Tom and co. an F in Geometry, and they try whatever they can to improve it. The grade ends up improving, and the gang finishes up a quiz before meeting up with Ben's Team during February Vacation. In the Fairy World War Arc., he and Mrs. Collins not only give Tom and co. a D- in Geometry, but they also assign them large quantities of homework, making them major antagonists of said Story Arc, along with Tord, Vinny, Olivia, Mr. Crocker, and Vicky. He’s been appearing in almost every episode since Season 28. After the Coronavirus hit, he has been teaching his class virtually until his final appearance in "Jim Runs a Tight Ship". 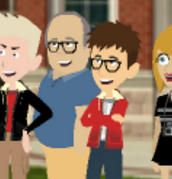 Add a photo to this gallery
Retrieved from "https://school-daze.fandom.com/wiki/Mr._Schaft?oldid=7857"
Community content is available under CC-BY-SA unless otherwise noted.