The Suburbs of Kentucky
Dustin Pillock, is a main character appearing in the Forever Sophomores Series. He is the teacher of Tom, Trent, Willy, and Caillou in US History. He’s been appearing in almost every episode since “The Learning Continues”.

Mr. Pillock is a smart person who seems to know a lot about America’s past. He teaches his students about how events from the past are related to today’s world. Also, Mr. Pillock is the first male Social Studies teacher that Tom and his friends got since Mr. Kannenberg from the Original Series. It is shown in many episodes that he's a HUGE Red Sox Fan. He is shown to be very fond of Tom and co, as he would usually refer to them as "Mr. Connelly", "Mr. Boyett", "Mr. Fredrickson", and "Mr. Tollar". Tom's sister Allison got him as her US History teacher in the Advanced Education series, but slowly grew to dislike him. He has been appearing in almost every episode since Season 28. His final appearance was in "The Suburbs of Kentucky".

Mr. Pillock has tan skin, blue eyes, and short brown hair. His outfits vary throughout the series, usually consisting of dress shirts with or without a tie, as well as trousers and formal shoes. However, he is mostly seen in 4 main outfits.

In the Forever Sophomores series, he wore a light blue dress shirt with a red tie, a black belt with a silver buckle, dark blue trousers, black dress shoes, and a black watch.

He sometimes wears a blue or black sports jacket with this outfit. His overall outfit is often seen in different colors.

His outfit during "The Weirdness War" consists of a red checkered dress shirt with the same dark blue trousers and black dress shoes.

In Advanced Education, he wears a light blue dress shirt similar to his original one, but with a white square outline pattern, a dark blue striped tie, the same belt, black trousers, and the same shoes. This outfit is often seen in different colors.

In the Dog-daze series, Mr. Pillock wears a light blue t-shirt with a pair of black sunglasses tucked into the collar, black Bermuda shorts, and gray slip-on shoes. In his second appearance, his shirt is a darker blue, while his shorts are white.

In Senior Year, Mr. Pillock’s main outfit consists of a bright-periwinkle long-sleeved dress shirt paired with a bluish-violet tie, the same black trousers, and a brown belt and shoes. This outfit is often seen in different colors. 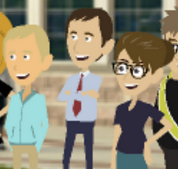 Add a photo to this gallery
Retrieved from "https://school-daze.fandom.com/wiki/Mr._Pillock?oldid=7861"
Community content is available under CC-BY-SA unless otherwise noted.