Michael Macari, was a main character appearing in the High School Years Series, as well as the main antagonist of the Post-Christmas Chronicles Arc. He was the teacher of Tom, Trent, Willy, and Caillou in Wellness. He taught his students about being Healthy. He made his students do Community Service, which Tom and the gang ended up doing at the last minute. He’s was the only male teacher that Tom and his friends have in Freshman Year. He first appeared in the episode “Welcome to Wellness”.

Mr. Macari was a kind person. He often helped Tom and the students with classwork. He taught students about certain health subjects, such as Depression, Bullying, Drugs, Suicide, etc. Mr. Macari was shown to be serious with his students doing their assignments. For example, in “The Community Service Problem”, when Tom and the gang told him they didn’t do Community Service, he was disappointed in them, but when they actually did it, He was impressed. Mr. Macari appeared in almost every episode, up until “New Term, New Classes”. Since then, he has only been making cameos in the hallways. He is now Allison's Wellness teacher.

Mr. Macari has tan skin, blue eyes, and black hair. His outfits vary throughout the series, but he is mostly seen in 2 outfits. 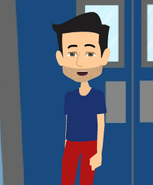 Add a photo to this gallery
Retrieved from "https://school-daze.fandom.com/wiki/Mr._Macari?oldid=4489"
Community content is available under CC-BY-SA unless otherwise noted.