Mr. Logan: Friend or Foe? Too Much Homework XVII

Mr. Logan is a recurring character in the "show" School Daze. He is the current Special Ed. teacher in Ms. Gritz's class after Ms. Keaton switched. He debuted in "Mr. Logan: Friend or Foe? Too Much Homework XVII".

Mr. Logan is a very helpful teacher, like any Special Ed. teacher. For Example, he often helped Tom and the gang with difficult projects or concepts, and even showed some concern whenever Willy was getting picked on by the other students. The year where the Forever Sophomores series took place is his first year teaching in Fredford High School. Before that, he taught in a different school in Boston. He was also a Soccer coach at one point. He's been appearing in almost every episode since his debut in Season 31.

Mr. Logan has fair skin, brown eyes, and short brown hair. He also has a beard. His outfits vary throughout the series(usually consisting of a dress shirt or polo with slacks), but he is mostly seen wearing 3 main outfits.

In the Forever Sophomores series, he wore a light gray dress shirt with rolled up sleeves and a red, green, and blue checker pattern, a black belt with a silver buckle, darker gray trousers, and black dress shoes. This outfit is often seen in different colors.

In "The Weirdness War", he wore a teal and white checkered dress shirt with rolled up sleeves, navy blue trousers, and brown dress shoes.

In the Advanced Education series, he wears a red short-sleeved polo shirt with pink stripes, the same belt from the previous series, khaki pants, and the same brown shoes from "The Weirdness War".

In the Senior Year series, his primary outfit consists of a white long-sleeved dress shirt, dark gray trousers, and black formal shoes. This outfit is often seen in different colors. 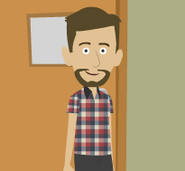 Add a photo to this gallery
Retrieved from "https://school-daze.fandom.com/wiki/Mr._Logan?oldid=6459"
Community content is available under CC-BY-SA unless otherwise noted.