The Suburbs of Kentucky

Levin Kannenberg, is a main character appearing in the Original Series, and later a recurring character in Senior Year. He was Tom & Trent’s homeroom teacher from the 7th grade. He was a very calm person, He never yelled or got angry at the other students for doing something bad. He appeared in almost every episode from Seasons 1-10. Then, in Seasons 11-17, he made minor appearances. He made his final appearance in “School Daze: The End", until his return in Senior Year.

Mr. Kannenberg was very nice. He would always be willing to help Tom & Trent with schoolwork. He let the utensils rent a closet for Herm-2’s Crib, at least until it got re-located in “The New Herm-2’s Crib”. Whenever a student or any of the utensils put a poster on his bulletin board, he wouldn’t mind. He also never gets angry, and there is a possible explanation for this. In the very first episode of the School Daze, Mr. Kannenberg revealed that he had some sort of condition, which possibly prevents him from getting angry. He is also shown to be good at playing the guitar, as he can be seen playing it in his classroom in one episode. In “The Darkening”, He plays his guitar again and sings a song about the good times they had in the 7th grade. He was Tom & Trent’s Homeroom & Social Studies teacher. He became their ELA teacher in “New ELA Class”. He made his final appearance in “School Daze: The End”, but returned as a recurring character 4 Series later.

Mr. Kannenberg has tan skin & brown eyes. He also has brown hair along with a brown beard. He is always seen wearing glasses. His outfits vary throughout the series, but he is mostly seen in one outfit, consisting of a white dress shirt with a purple vest, blue jeans, and black shoes.

When he appeared in the Pi Day video featured in HU013, He wears a brown hat, a dark green and white checkered dress shirt with short sleeves, a black collared undershirt, brown jeans, and brown and white shoes. He can also be seen wearing a red flannel with blue jeans and a black polo with black pants, as well as a salmon shirt in the School Directory.

In Senior Year, he wears a light blue long-sleeved dress shirt with and indigo and red patterned tie, a black belt with a silver buckle, khaki pants, and black formal shoes. This outfit is often seen in different colors. Sometimes, he wears either a vest, sweater, or blazer with his outfit.

Mr. Kannenberg was Tom and Trent's Homeroom and Social Studies teacher in 7th Grade. He has appeared in mostly every episode of School Daze from Seasons 1-10, but he was absent in a few episodes. He made minor appearances in Seasons 11-17. After his final appearance in “School Daze: The End”, He was never seen again. In the Advanced Education episode "The Utensils are Alive! Bernie and the 5 Stages of Grief!", he can be seen playing his guitar during a few musical bits in the Pie Day video made by the staff of Robinson Middle School. Near the end of the Dog-Daze series, it is revealed by Allison that Mr. Kannenberg would be working at Fredford High this year. In the Senior Year series and onward, he became a recurring character, as he is often seen in the hallways. He made his final appearance in "The Suburbs of Kentucky".

Mr. Kammerer getting homework from Trent 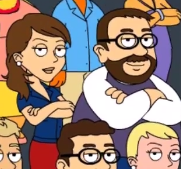 Senior Year Artwork
Add a photo to this gallery
Retrieved from "https://school-daze.fandom.com/wiki/Mr._Kannenberg?oldid=7855"
Community content is available under CC-BY-SA unless otherwise noted.