Michael Jared Connelly, is a main character in the show School Daze. He is the cousin of Tom Connelly. He would invite Tom and his friends to his house every weekend to play Video Games. He lives in Milford with his father, Jerry. He always carries a puppet around named Mr. Ed. Whenever he talked to Mr. Ed, someone would say “I really hate that puppet”. He was originally hired by Mr. Krabs, along with Ronny, who disappeared after “Michael the Explorer”, to replace Mordecai and Rigby.

Michael is a very cool person. He is skilled at video games and has a YouTube channel called “SouthParkYoutuber45”. He can do impressions on all of the characters from South Park. Michael uses a puppet named Mr. Ed in every episode he appears in, except for his debut in the Adventure Sponge episode “Spooky Halloween Mystery”. However, Mr. Ed makes his debut in “Dinner with Michael and Ronny”. When asked why he didn’t bring him to the Halloween Party, he responds by saying: “Oh, that’s because I didn’t want people to think I’m weird”. However, after that, he began taking Mr. Ed everywhere he goes, and doesn’t care what people think of this habit. He could even care less about the disappoval of his own friends and family. This caused him to get bulied in Elementary School, but he was oblivious to it. In the Heroes United Arc, he revealed that Mr. Ed was a gift from his late Aunt Annabelle. In Wazzup w/ B-MO, he reveals that he is Tom’s Cousin. Michael would often record himself playing games with Tom and his friends, with a buttload of commentary. Michael is very kind and caring towards his cousins and friends, and usually gave Tom and co. advice on how to deal with problems at school. Another example of his kidness was around the time he first met Ronny, as he didn’t abuse him for his pranks like everyone else did, and even helped him get back at his bullies. He has also showed remorse for neglecting Ronny for 5 years(though this was because he thought Ronny was killed in a plane crash in 2015), fixing their friendship. He also acts in a very formal manner towards his parents, often referring to them as “Mother” and “Father”.

Michael has fair skin, brown eyes, and brown hair. He wears a silver watch on his left wrist and carries a puppet named Mr. Ed on his right hand. He wears 3 outfits throughout the series.

In the Adventure Sponge series, he wears an orange hoodie with a red undershirt, dark blue pants, and black sneakers.

In 8th Grade Adventures, High School Years, and Forever Sophomores, he wears a maroon dress shirt with a light yellow t-shirt underneath, a brown belt with a silver buckle, light blue jeans, and dark red loafers with light brown soles.

In Advanced Education, Michael's appearance pretty much stays the same, but with a few changes. While keeping his belt, watch, and maroon dress shirt from his previous outfit, the color of his light blue jeans are changed to brown, and his undershirt is now white. On his feet, he wears a new pair of black loafers.

In Dog Daze of Summer, Michael’s attire remains somewhat unchanged, except for the fact that his maroon dress shirt is untucked and the sleeves are rolled up, as well as the color of his undershirt being changed to black. He also trades his old brown legwear for a new pair of white bell-bottom jeans, and his loafers are now gray with black soles. He maintains the same watch and belt from his previous 2 outfits.

In Senior Year, Michael's outfit is different from the previous outfits he had worn. Instead of his usual maroon button-up, Michael wears a red short-sleeved polo shirt with blue, brown, and white stripes. He also wears gray jeans, white sneakers, and the same belt and watch from his previous outfits.

As a 10-year-old child, he has messier hair and wears a teal t-shirt underneath a dark gray sleeveless hoodie, blue jeans, and gray sneakers.

In the second half of 8th Grade Adventures as well as a few High School Years and Forever Sophomores episodes, Michael wore a yellow long-sleeved dress shirt, a red scarf, a white vest with black spots, a brown belt with a gold buckle, blue jeans, and brown boots.

For formal occasions, Michael would wear a black suit with a white shirt and red tie, as well as black shoes.

In cold weather, Michael used to wear a brown jacket with white trim with his usual outfit. Starting with Advanced Education, his jacket is light blue with yellow trim.

His swimwear consists of maroon trunks with side pockets.

In the alternate timeline, Michael wears his maroon dress shirt with a black sweater hanging over his shoulders and tied over his chest, khaki pants, brown loafers, and the same belt and watch worn by his main counterpart. When going out with the family, Michael wears a light blue Hawaiian shirt over a white shirt, brown shorts, and pink sandals.

During the home videos in "Memories", Michael wears a black hat with blue stripes and a gray puffball and rim, a turquoise winter jacket with blue sleeves, black buttons, and gray and orange laces, black and gray gloves, black snow pants with white outlines, and black snow boots with blue stripes on the tips. He also wears a gray camo-patterned tank-top with maroon pants for sleepwear, and in the last two videos, he briefly reverts back to his default Wampanoag outfit.

In "Comatose", Michael wears his Adventure Sponge outfit, but wears an orange graphic t-shirt with blue pants for sleepwear, and an orange winter jacket in cold weather. When Sally returned from the Hospital, Michael wore an unbuttoned, orange short-sleeved dress shirt over an off-white shirt, cropped blue jeans, and his black sneakers.

Michael was born on November 12, 1998. He was raised by Sally and Jerry, and eventually, Annabelle and William. When he was younger, he attended Oak Street Elementary School, where he met Ronny, and some time before that, he met Andy at Cowboy camp. He spent most of his childhood in Norwood and Franklin before moving to Milford with Jerry after the divorce. He first appears in the Adventure Sponge episode "Spooky Halloween Mystery". He was originally hired by Mr. Krabs to replace Mordecai. He was dressed as Sir Cador from Poptropica. He helped the gang solve the mystery of the ghost pirates. He has been hanging out with Spongebob, Finn, and the whole gang ever since. In "Wazzup w/ B-MO", it is revealed that Michael is Tom's cousin. After this revelation, he began appearing in almost every episode of the School Daze series, often joining them for dinner-outings and weekends in Milford. Starting with the end of Forever Sophomores, he is attending college and studying to become a great YouTuber, but still makes time for dinner and weekends with Tom and co.

Michael gets along with pretty much everybody. He invites everyone new he meets to watch him play games such as Roblox, Minecraft, Sims 3 or 4, Happy Wheels, etc. However, like mostly everyone else, he despises Boots the Monkey, but this changes by Mid-Forever Sophomores.

Michael on the Computer

Michael having dinner with Spongebob and Finn 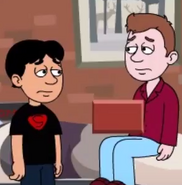 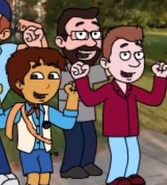 Michael cheering at the Bus Stop 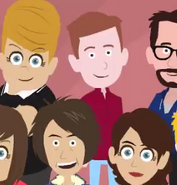 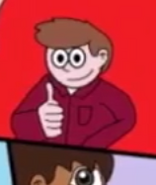 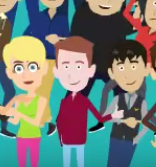 Michael's Road to the Omniverse Artwork

6-12 Year-Old Michael in Senior Year flashbacks.
Add a photo to this gallery
Retrieved from "https://school-daze.fandom.com/wiki/Michael_Connelly?oldid=7690"
Community content is available under CC-BY-SA unless otherwise noted.