Stink Putty (All Grown Up)

Sim Story
Mason Patzer is a character in Toy Story That Time Forgot, as well as one of the main protagonists of Advanced Education. He appears to be Bonnie Anderson's best friend and is the owner of the Battlesaurs and Reptillus Maximus. He is also shown to have a rather rich family, as shown by his house, his entire collection of Battlesaurs, and his brand new video game console. He is voiced by R.C. Cope in Toy Story That Time Forgot, Stink Putty in All Grown Up, and Mitchell Musso in School Daze.

Mason is kind, fun-loving, daring, and playful as a child. He is obsessed with video games, and would often invite Bonnie(or some of the toys) to join him. He was neglectful for his own toys, due to this video game obsession, but started playing with toys again at the end of Toy Story That Time Forgot. He often plays Truth or Dare on his phone with them, like many other characters would occasionally do. He keeps his video game loving trait as a teenager. In Advanced Education, Mason is shown acting just as immature as Willy, often aiding him in his shenanigans. He even shares Willy's love for the Papa Louie franchise, despite not having played half of the games. He is mainly known for saying "That's What She Said" from time to time, just like Michael Scott from "The Office". This, of course, irritates Bonnie a lot, but Terri seems to find it funny, most of the time.

Mason is a 16 year-old boy with fair skin, brown eyes, and brown hair. He is quite thin for his age, and is around the same height as Bonnie. He wears 7 different outfits throughout the franchise, which are mainly seen in the colors red, blue, brown, or black.

In Toy Story That Time Forgot, Mason is around 4 years old, and wears a bluish-gray dress shirt underneath a red sweater, brown trousers, and black formal shoes.

In the All Grown Up series and his debut in Forever Sophomores, Mason wears a dark blue hooded jacket(which is unzipped with rolled up sleeves), a red short-sleeved undershirt, brown jeans, and navy and blue sneakers with yellow-green accents. He also has a black and green wristband on his left wrist.

In “A New Beginning”, Mason wears a navy blue hoodie with a picture of Peter Griffin on it. Underneath it, he wears the same red t-shirt from his previous outfit. He also wears black sweatpants and black and blue sneakers.

In the first, second, and third Seasons of Advanced Education, as well as "One Night at Carver Inn", Season 5, the first 3 episodes of Season 6, the Cipher's Law Arc, and Seasons 1-7 of the Senior Year series, Mason wears a red freestyle vest over a blue flannel shirt with rolled-up sleeves. Underneath the flannel, he wears a light gray Avengers: Infinity War t-shirt. He also wears green harf pants held up by an olive green belt with a silver buckle. On his feet, he wears brown hiking boots with black soles and red laces. In Senior Year, he wears a white Avengers: Endgame t-shirt underneath his flannel.

In Season 4 and a couple episodes of Seasons 5-6 with cold weather, Mason wears a dark blue button-down shirt underneath a long red coat with a gray hood and trim, dark brown trousers, and a pair of black knee-length boots with blue accents. In the Season 4 finale, Mason switches back to his Seasons 1-3 attire.

In "Dental Repairs", "Delay in Understanding", and the remainder of the 6th Season, as well as the fifth movie and the Heroes United Arc, Mason wears a red and white short-sleeved raglan shirt underneath a black formal vest with red pinstripes and silver buttons, a brown belt with a silver buckle, dark blue trousers, and black dress shoes with dark brown soles.

During the Distance Arc and the rest of Senior Year, Mason wears a red t-shirt with a white Millenium Falcon graphic on it, khaki pants held by a brown belt with a silver buckle, and dark brown saddle shoes. When working at Sunnyside Daycare, he wears the standard teal uniform vest with purple trim and multiple badges over his shirt.

In the Dog-Daze of Summer series, Mason wears a dark blue t-shirt with a red campfire symbol on it underneath the same red freestyle vest he wore in Seasons 1-5 of Advanced Education. He also wears his harf pants, which are brown instead of green, and held up by a darker brown belt(similar to the one in AE Seasons 6-10). On his feet, he wears a pair of black crocs with blue accents. He also wears a white Apple watch on his left wrist.

He is first seen playing his new games console which he got for Christmas, before he notices Bonnie and invites her to join him. She then throws her bag of toys containing Woody, Buzz, Rex, Trixie and Angel Kitty into the neighboring playroom. It is here that the gang first meet the Battlesaurs, along with Reptillus Maximus. He is later seen when The Cleric is observing both him and Bonnie playing video games, and Woody and Buzz realize that while Mason is distracted with his gaming, The Cleric can rule over the Battlesaurs without interference from the boy. When Trixie convinces Reptillus to accept that he is a toy and that Mason is his owner, he turns off the power to the game to get Mason's attention. When the latter goes to turn the power back on, he finds Reptillus instead, and decides to play with him after he sees Bonnie having fun playing with the toy. They then run into the playroom, saving Woody and Buzz from execution by "The Pit," and they enjoy the rest of the day playing with their toys. Later that night, Mason is shown to have written his name on Reptillus' hand, signifying his ownership of the toy just like Andy and Bonnie did. He also appears to have chosen Reptillus as his favorite toy.

Mason first appears in the episode "Sim Story", where Phineas and Ferb build a device that teleports their group, and everyone in their radius into the Sim World. Bonnie and her group just so happened to be in that radius, and ended up in that world too. Bonnie, Andy, and the other toys didn't really approve, so they tried whatever they could to get back in the real world. Mason ended up in the world too, but he wasn't in the same household as Bonnie and Andy. Despite this, he was still seen when Bonnie visited him at his household, and when he was walking through the town, as well as the very end of the episode.

While Bonnie Anderson and Mason Patzer, along with their toys, go with Andy Davis to his mother's house to help her move a carpet, when, unbeknownst to them, Sid Phillips is stalking them, recording footage of the toys coming to life, and showing it to the Government, who later show up at their house to try and take the toys away so they can experiment on the toys and eventually destroy them, and Bonnie and Mason, who found out on a prior occasion, are devastated by this. Their parents, not wanting them to be unhappy, decide to take the kids and move to Fredford Massachusetts to avoid the government. He and Bonnie have been attending Fredford High School, along with Tom, Trent, and Willy ever since. Near the end of the series, Mason helps the heroes defeat the Akatsuki and put them behind bars, as well as finishing the finals with Tom and co.

Mason will return in this series as a Senior in Fredford High. 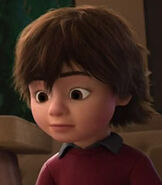