Board of the Arts
Lillian Marie Jill DeVille is a major character in Rugrats and All Grown Up!. She is a friend of Tommy Pickles, as well as the twin sister of Phil, and the daughter of Betty and Howard. She first appears in "Board of the Arts".

Lil DeVille's friends insisted on her to assert her independence and moved out of the bedroom she shared with her twin brother Phil. Of course, their reasons were based on popularity. They liked Lil, but thought that her brother was gross. But as a twin, Lill stuck up for Phil and left the crowd in favor of being faithful to her brother. Apart from the fact that they are now dressed differently, Lil has evolved into several strange things that are quite different from his older brother. For one thing, she feels a little superstitious to wear lucky hats and shoes, which will help her do well with school tests.

When she first appeared in "Board of the Arts", Lil, along with the rest of the Rugrats, played some board games online with Caillou and his team. Throughout most of the "Karaoke Conflict Arc", she is mostly seen rehearsing with Stewie, after him and Brian ended their friendship. She sang the song "I Just Died In Your Arms Tonight" with Phil during Karaoke Night, in order to save the Java Lava. By the end of the Arc, Lil begins to help Caillou's Team in their mission to rescue Perry.

Lil has fair skin, brown eyes, and brown hair, to which she often adds a hair accessory. She also looks very identical to her twin brother Phil. She wears several outfits throughout the 3 different programs she appeared in.

In Rugrats, Lil had a small amount of brown hair with a pink bow on the top, which was usually combed down. She wore a pink short-sleeved, pinstriped shirt underneath a turquoise overall dress (with a white handkerchief on the left, and a yellow duck on the right), a white diaper, white ankle-length socks, and pink shoes.

In Rugrats Go Wild! she wears a green silor shirt in a similar design as her overall dress, a white undershirt with a pink stripe, and a white sailor hat(which she loses during the storm). The rest of her attire stays the same.

In All Growed Up, Lil had longer hair, but still wore her trademark pink bow in it. She wore a pink short-sleeved jacket with a darker border, a green undershirt with a yellow duck on it, a blue bracelet on her left wrist, a blue skirt with laces, and pink high-top shoes.

In All Grown Up, Lil's outfits change often, but she is mostly seen in 3 different outfits.

In Forever Sophomores, Lil begins wearing the same clothes as Phil again, which are similar to what she wore in Rugrats. She keeps her hairstyle and bracelets from Seasons 2-5 of All Grown Up! and wears a turquoise long-sleeved varsity jacket with a pink collar and sleeves, yellow trim, a yellow duck on the left side of her chest, and a white "L"(which stands for Lil), on the right, a pink short-sleeved undershirt, white cargo capris, white socks, and pink Adidas sneakers. 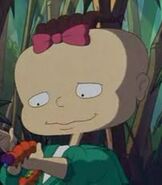 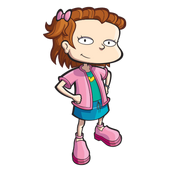 Add a photo to this gallery
Retrieved from "https://school-daze.fandom.com/wiki/Lil?oldid=2873"
Community content is available under CC-BY-SA unless otherwise noted.