Kimiko "Kimi" Watanabe-Finster is a major character in Rugrats and All Grown Up!. She is the current girlfriend of Tommy Pickles, as well as the step-sister of Chuckie, and the daughter of Chas & Kira. She first appears in "Board of the Arts".

Kimi Finster has become a very cool, free and independent preteen. She likes strange music, funky costumes, and even finds a potential infatuation in the form of her green-haired classmate Z! Still, Kimi is a devoted sister of Chuckie, who offers support to her brother in matters of the heart and advice on how to increase their confidence. But sometimes Chuckie can be a little overprotective with his sister, a fact that Kimi appreciates, but sometimes finds him annoying.

When she first appeared in "Board of the Arts", Kimi, along with the rest of the Rugrats, played some board games online with Caillou and his team. Throughout most of the "Karaoke Conflict Arc", she is mostly seen rehearsing with Brian, after him and Stewie ended their friendship. She sang the song "Anything You Can Do, I Can Do Better" with Chuckie during Karaoke Night, in order to save the Java Lava. By the end of the Arc, Kimi begins to help Caillou's Team in their mission to rescue Perry.

Kimi has fair skin, blue eyes, and purple hair, which i often seen in pigtails. She wears several outfits throughout the 3 different programs she appeared in.

When she debuted in "Rugrats in Paris", Kimi had her hair in 3 pigtails and wore a yellow short-sleeved dress with a blue cat on it, a white diaper, and purple boots.

In Rugrats, Kimi's appearance looks similar to Rugrats in Paris, but with a minor tweek. Her hairstyle stays the same, and she now wears a pink t-shirt underneath a yellow overall dress with her cat logo on it, as well as the same white diaper and purple boots.

In Rugrats Go Wild!, she wore a green overall dress with an orange fish on it, a yellow t-shirt, and her diaper and boots. She briefly wore a green sunhat, but she lost it during the storm.

In All Growed Up, she sported her hair half loose and in a bun. She wore a pink tank-top over a yellow t-shirt, a green skirt with a pink and yellow triangle pattern, pink socks, and purple boots.

In All Grown Up, Kimi's outfits change often, but she is mostly seen in 3 different outfits.

In Forever Sophomores, Kimi wears an outfit smilar to one of her All Grown Up Seaons 2-5 outfits, but with the colors from Rugrats. She wears a pink denim jacket over a yellow midriff-exposing tank-top with her blue cat on it, a white mini-skirt, green socks, and her purple boots. 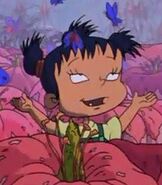 Add a photo to this gallery
Retrieved from "https://school-daze.fandom.com/wiki/Kimi?oldid=2871"
Community content is available under CC-BY-SA unless otherwise noted.