Ni Hao to the Paw Patrol!

Kai-Lan Chow  is the main protagonist of Ni Hao, Kai-Lan. She is voiced by Chinese-American actress Jade Lianna-Peters. In School Daze, she is voiced by Janet Parker.

Kai-Lan is a 6-year-old Chinese girl and is the granddaughter of Ye Ye. Her best friends are Tolee, Hoho, Lulu and Rintoo. She is adorable, sweet, affectionate, friendly, playful, adventurous, cute, bright, very beautiful, and has a big heart. She speaks English and Mandarin Chinese, and is eager to share her language, culture and playing time with her animal friends and members of the audience at home. Kai-Lan is a natural leader, but she is also careful and attentive with a gift to help her friends when they really need her. Her favorite animals are the dinosaurs and in her music group, she plays her tambourine. She was born on November 8, 2001. In School Daze, Kai-Lan is now 12 years old, and is still willing to help anyone in need. She even helps Caillou rescue Stewie from a Maximum Security Prison in Advanced Education, along with Brian, Little Bill, and Ryder.

Kai Lan has fair skin and has black hair tied up in two buns with red flowers on it. She has white and brown eyes with black and white pupils.

In Ni Hao, Kai-Lan, Kai-Lan was 6 years old, and wore a blue sleeveless shirt with two red hearts and a jade necklace on it. She also wears orange shorts with red stripes on them, and a pair of red shoes.

In School Daze, Kai-lan is now 12 years old, and she now wears a blue short-sleeved Changshan with yellow trim, red stitching, and chest pockets with red hearts on them, the same necklace, orange capris, and red sandals. 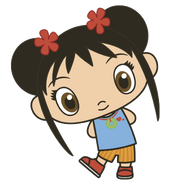 Add a photo to this gallery
Retrieved from "https://school-daze.fandom.com/wiki/Kai-Lan?oldid=4068"
Community content is available under CC-BY-SA unless otherwise noted.