Quest to get an Xbox

Janet Ugandan, is a main character in the show School Daze. She is a friend of Tom from School. She used to constantly nag Trent and Eddy, which caused them to hate her. She appeared in almost every episode of School Daze from Seasons 1-10. She was absent in Seasons 11-17. She returns in Season 18, she’s been appearing constantly ever since.

Like Allison and Kelly, Janet was your normal everyday teenage girl. She would use her phone and chat with friends. In earlier episodes, she nagged Trent constantly, but in later episodes, she started nagging Evan. Janet used to call Kelly a troublemaker, even though she has shown signs of being a troublemaker herself. At one point, Kelly mentions that Janet has once skipped a lunch detention. In the School Daze episode “High School Begins”, she claims that her and Ms. Robinson have a bad history. She was shown to be very fond of Kelly. Like for example, She was seen hugging her, while crying about leaving Remington in “Outdoor Activities”. She was also seen doing this in “The Darkening”. After this, she has been absent from the series due to being at High School. That was, until the start of Season 18, when Tom, Trent, Willy, and Caillou were heading to High School themselves. She also made a cameo in “Simpsons Guy 2: Boyfriend Trouble”. In one episode, it is revealed that she is dating Rick. After graduating, she was never seen again. However, she returned for a 5th Year in the following series.

Janet has fair skin, brown eyes, and brown hair, which is often seen in a ponytail. She also wears teal glasses. Her outfits vary throughout the series, but she wears 4 main outfits.

In the Original Series, She wore a pink hooded jacket that read: PINK, a white short-sleeved undershirt, blue jeans, and white sneakers

In the Adventures in South Park Series, Her glasses were missing and she wore a green hoodie, dark blue jeans, and black shoes.

In the High School Years series, she got a new outfit, which consisted of a gray T-shirt with a white top underneath, blue denim shorts, and pink flip-flops. She also wears 2 other recurring outfits:

In the first 2 seasons of the Forever Sophomores series, she got a new outfit, which consisted of a dark purple v-neck shirt, blue jeans, and white flip-flops.

Starting with Season 30, up until the end of Season 35, she begins wearing a navy blue hoodie with the Fredford High School logo on it, an undershirt of varying colors, black leggings, and gray boots.

In Season 36 and the rest of Forever Sophomores, Janet can be seen wearing an outfit similar to what she wore in the Original Series, but with darker tints. She wears a magenta hooded jacket with a teal tank-top underneath(sometimes blue, white, gray, or other colors), dark blue denim shorts(jeans in Season 35), and a black pair of sandals.

In "The Weirdness War", Janet discards her jacket and wears a blue tank-top with her dark blue denim shorts and black sandals.

In Advanced Education, Janet can be seen wearing a frilly white short-sleeved blouse that reveals her midriff, which is covered by a black top. She also wears a pair of blue jeans, and her black sandals now have diamonds on them. This outfit is seen in different colors. In the promotional artwork and the first intro, she wore a purple tank-top, her dark blue denim shorts from Season 37, and a pair of lavender flip-flops.

In Season 2 of the Advanced Education series, she is seen wearing a black t-shirt with black leggings and the same sandals. This outfit is sometimes shown in different colors. In the Halloween special, Janet wore a dark blue long-sleeved shirt with her leggings and sandals. In Season 3, she wears a blue t-shirt with her black leggings and brown moccasins. During the first Best Buddies meeting and Season 4, she wore the same outfit she wore in Seasons 3-8 of Forever Sophomores. In the Christmas Special and Season 5, her navy blue hoodie is replaced with a lighter blue one, but switches back to her previous hoodie in Seasons 6-7.

During Best Buddies Prom, she wore a black dress. Her Unified Track uniform consists of a navy blue t-shirt, black athletic shorts, and gray sneakers. This outfit is usually seen in different colors. In her last appearance before graduation, she wore a yellow t-shirt, black shorts, and her black sandals. When she graduated, she wore the standard black graduation uniform.

Janet’s main outfit consists of a black t-shirt, dark blue jeans that are ripped at the knees, and silver flip-flops. She would also be seen wearing tank-tops or t-shirts with either jeans, leggings, or shorts for legwear. On her feet, she would wear either flip-flops, sneakers, moccasins, or boots. She wears hoodies in cold weather. Her clothing is usually seen in the colors black, blue, purple, green, gray, white, or pink.

In the Original Series, Janet was a main character who would appear in almost every episode, until her departure in "The Darkening", when she moved on to High School. Due to being a Freshman, She doesn't appear in the 8th Grade Adventures Series. She returns in the High School Years series and begins appearing in almost every episode from Seasons 18-present. In Forever Sophomores, she attends Tom and co.'s Marine Science class. Shortly after, Michael was working on a fandom based on his current life. Unfortunately, Janet managed to discover it and began to raging about it online. From threatening to call the police, to sending a hurtful Facebook message to Aunt Sally. Because of this, Tom and co. begin to avoid her at all costs in order to prevent future conflict. She isn't in any classes with Tom and the gang in Advanced Education, but she is in their Unified Track. Since she is now a Senior, Janet has graduated from high school at the end of the series, and despite this, she still returns in the Senior Year series, as she is forced to attend a 5th year of High School.

Janet can get along with anybody, especially Kelly. However, she tends to have arguments with other characters that annoy her, such as Trent, Eddy, Evan, and sometimes Jacob. 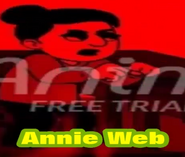 Janet running out of School 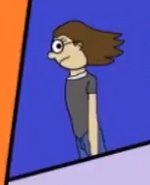 Add a photo to this gallery
Retrieved from "https://school-daze.fandom.com/wiki/Janet?oldid=6793"
Community content is available under CC-BY-SA unless otherwise noted.