Ms. Robinson is Back! On the Road to Graduation!
Jacob Marten, was a main character and former antagonist in the show School Daze. He used to be a classmate of Tom, Trent, Willy, and Caillou in Essentials to Literacy and Biology. Now he's their classmate in Academic Support. In the sixth grade, he picked on Tom and Patrick in the van, and Tom had been trying to avoid him ever since. He made cameo appearances in Seasons 1-10, He was absent in Seasons 11-17, and starting at Season 18, he became a main character and started appearing in almost every episode, up until his graduation at the end of Advanced Education.

Jacob was a grouchy teenager. Like Bryce, he had no interest in school whatsoever. For example, he would normally refuse to participate in class activities, such as playing with drones, dissecting frogs, and helping to create and present the Obama High project. In the short “Patrick goes to School”, he was a bully towards Patrick and Tom, often teasing them for moving slowly towards the van. This was why Tom and Trent tried to avoid him in the 7th grade. In High School, they were shocked to learn that he was in their A period class, but later on, they felt safer near Jacob, and would often chat with him in Biology and say hit to him in the hallway. He only changed a little bit since the 6th grade, as he was no longer hostile towards Tom and his friends, and would often make inappropriate jokes in class. Jacob made cameos in Seasons 1-10, He was absent in Seasons 11-17, and he had started appearing in every episode since Season 18, up until his graduation in "Ms. Robinson was Back! On the Road to Graduation!".

Jacob’s outfits vary throughout the series, but he wears 3 main outfits. He had fair skin, blue eyes, and messy black hair. He often wears a t-shirt of varying colors with blue jeans.

In the shorts and Original Series, He was mostly seen wearing a light yellow T-shirt, blue jeans, and white sneakers.

In the High School Years series, he wore a different outfit, consisting of a brown T-shirt, blue jeans, and black and white sneakers. In cold weather, he would wear a black and red hooded jacket with this outfit.

In the Forever Sophomores series, he wears an outfit different from his previous outfits. He wears a blue t-shirt, black cargo shorts instead of jeans, and gray sneakers. In Season 29, he began wearing blue jeans again.

In Season 1 of the Advanced Education Series, Jacob was seen wearing a new outfit, which was similar to his Forever Sophomores outfit, but in different colors. He wears a mint-green t-shirt, khaki cargo shorts, white socks, and black sneakers. Also, his hair had gotten a lot shorter.

In the promotional artwork, he wore a gray t-shirt with red trim, his blue jeans, and white sneakers.

In Seasons 2 and the rest of Advanced Education, Jacob switches to a different outfit, consisting of a light blue t-shirt(which often varies in color), his blue jeans, and the same sneakers. In cold weather, he wears a black winter jacket with gray trim. In the Halloween Special, he wore a black and gray jacket over a greenish-gray t-shirt, as well as his blue jeans and black sneakers.

In 6th Grade, he bullied Tom and Patrick, causing Tom to avoid him in the 7th Grade. In High School, he was in some of Tom and co.'s classes, which lead to them try to stay out of his sight, but they became close friends as time progressed. In Forever Sophomores was in one of Tom's Academic Support classes. In Advanced Education, he would make cameos in the hallways, but at the end of the series, he graduated and was never seen again.

Jacob often acts grouchy towards everyone he meets. 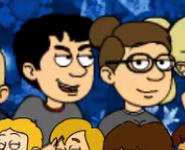 Only time he smiles

15-16 Year-Old Jacob in Advanced Education flashbacks
Add a photo to this gallery
Retrieved from "https://school-daze.fandom.com/wiki/Jacob?oldid=7323"
Community content is available under CC-BY-SA unless otherwise noted.