Stanley "Stan" Pines, also known as "Grunkle Stan", is a main character who appeared in the Disney series Gravity Falls. He is the great uncle of Dipper and Mabel Pines and twin brother of Ford Pines. He is also the owner of the Mystery Shack, a tourist trap full of questionable oddities and mysteries.

Grunkle Stan has fair skin,brown eyes, and short gray hair, which is covered by his trademark maroon fez, which has a yellow fish-like symbol with a dot next to it printed on the front. He also sports a pair of black-rimmed glasses, a reddish-pinkish nose, and a 5 o'clock shadow.

In Gravity Falls and the Rise of Bill Arc, he mainly wears a black suit with the jacket buttoned closed, a white dress shirt, a maroon bow tie that matches his fez, and a pair of light brown boots. When he's not working, he wears a white tank top, a gold necklace, blue striped boxers, and a pair of blue slippers.

Off to the Falls/Senior Year Edit

In Off to the Falls and Senior Year, he is seen wearing a red beanie, a dark brown jacket over a lighter brown life vest and his white tank-top, dark gray pants, and black shoes. He also wears this during a scene in Dipper's monologue, where Stan and Ford are venturing the ocean and fighting a giant squid.

When he was younger, he had the same physical features, except that he didn't wear any glasses, and his hair was brown. As a young child, he wore a white and red striped t-shirt with rolled up sleeves, blue jeans, and red and white sneakers. He also had a band-aid on his left cheek. In his teens, he wore a white t-shirt with rolled up sleeves, the same blue jeans and red sneakers. When Ford gets sucked in the portal, he wears a filthy, dark red parka with fur on the hood, a white undershirt, black trousers, and brown boots.

Grunkle (short for "Great Uncle") Stan is the 67-year-old great uncle of Dipper Pines and Mabel Pines, 12-year-old twins, whom he is watching for the summer. This does not always sit well with him and sometimes he argues with Dipper. Lately, in private moments, Stan admitted to himself that Dipper is headstrong and stubborn, like himself. He likes Mabel tremendously and indulges her as much as he can, but doesn't care as much for her pig Waddles. Because of his loud scoffing at Dipper's investigating Gravity Falls, Dipper, Mabel, and Stan's employees (handyman Soos and Wendy Corduroy, his teenage part-timer) thought he was unaware of the town's weirdness. However, in the Season 2 premiere episode ("Scary-oke"), it was revealed that Grunkle Stan knew quite a bit about the town's strange secrets; he claimed he had been trying to keep Dipper and Mabel safe. Though grouchy by nature, he's fiercely protective of his family—he leaped into battle against zombies armed with a baseball bat and brass knuckles to save them—but keeping secrets from the twins has ended up putting them at risk, mostly because Dipper won't give up trying to find answers. He promised Dipper not to keep any more secrets if Dipper would stop investigating; both were lying. Although presumably old enough to be retired, Stan works nearly every day. He's the cheapskate proprietor of "The Mystery Shack," a cheesy tourist trap he created by building additions onto his own home in the woods near the town. Its notable features: the "S" in the Shack's rooftop sign never stays attached, there's a tall totem pole in the side yard and the roof has a weathervane whose four letters spell out WHAT beneath a question mark. A combination of local "weirdness museum" and gift shop, the Shack offers tours of its exhibits (which most people think are fake) and has a number of truly unusual objects presumably for sale. Stan is always on the lookout for a sucker, a great deal or loose change he can pry from its owner. Uncommonly lazy apart from his zeal to make money, Stan often foists his mundane chores off on Dipper or his handyman Soos. He also keeps "contraband" (that is, anything he confiscates from his family or from troublesome visitors) in his room behind a painting.

Off to the Falls Edit

1 Year after the Gravity Falls series ended, Dipper and Mabel meet Phineas and Ferb after Ford takes them to Danville, so he can use their brains to help rescue his brother Stan, who was kidnapped by Caillou. Because their parents are on a trip to Hawaii around the same time, they stay with the Pines twins. As more of their closest friends move in, the gang does many things, such as going to a Murder Mystery play, a Lego Convention, a couple Baseball Games, etc., while Stan spends most of this series as Caillou's hostage. Eventually, they have a final battle with Caillou and Bill Cipher before parting ways.

2 Years Prior to Forever Sophomores Edit

Not much is known what Stan has been up to during the 2-Year Timeskip, but it is likely that he continued to travel with his twin brother Ford.

2 Years after "Off to the Falls", Dipper and Mabel begin to recall the adventures they had with Phineas and Ferb, and eventually decide to give them a call. They plan to meet up at the Mystery Shack the next day. The Reunion changes from happiness to rage when Caillou joins the party uninvited. Despite his attempts to apologize and warnings about Bill, Stan, along with the others, are still mad at him and shut him out. Caillou finally earns their trust by performing CPR on Perry after he was knocked out during a battle with Bill and Tord. since then, Phineas and the gang begin to constantly hang out with Caillou and do many fun things together.

In the episode "Stan O' War", He returns along with his brother and takes Phineas, Ferb, Dipper, and Mabel on a boat trip to find the last piece needed for the Other-Dimension-Inator so they can rescue Caillou and Perry, who are trapped in the 2nd Dimension at the time. 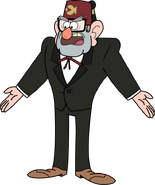 Add a photo to this gallery
Retrieved from "https://school-daze.fandom.com/wiki/Grunkle_Stan?oldid=7533"
Community content is available under CC-BY-SA unless otherwise noted.