Critters
Eric Theodore Cartman, better known by his surname Cartman, is one of the main protagonists, as well as the on and off main antagonist and sometimes an anti-hero of the highly popular adult animated sitcom, South Park. He is also the deuteragonist of South Park: The Metal of Trust.

He is voiced by the series' co-creator Trey Parker, who also voices Stan Marsh and many other characters.

Cartman is obese. He wears a red jacket, yellow gloves, an aqua blue hat with a yellow puffball on top, brown pants, black shoes, and white socks. He sometimes wears a green T-shirt with a bear picture on under his jacket, a white tank top, and occasionally a dark red T-shirt. He has medium-brown hair and a double-chin. He also has triangular-shaped eyebrows in contrast to the other main boys' rectangular ones.

Despite being one of the main characters on the show and arguably the most popular and primary mascot Cartman is arrogant, psychopathic, sociopathic, foulmouthed (the most foulmouthed character in the show's fictional universe), self-centered, argumentative, egotistical, greedy and openly prejudiced against anyone not a healthy, average-income, cisgendered, heterosexual and Catholic, Christian or atheist Caucasian male. Cartman says and does despicable things for fun or a higher purpose such as theft, lying, slander, even torture and murder. He once calmly said the pain and suffering of others amused him, seemingly not realizing it was a bad thing. On occasions he embraces the negative side of life such as willingly and knowingly being an emotional monger for avaricious reasons. He is constantly making nasty remarks at the expense of individuals with foreign heritage or blood and flatly thinks females are automatically inferior to males in everything. He also stereotypes every possible race and religion and makes up generalized assumptions about things he knows in the world around him (both positively and negatively) without hesitation or shame. Due to the messed-up nature of South Park his beliefs more or less turn out right; a gag in the series shows him and Kyle having bets on whether or not what Cartman says is true with the oversized boy actually being correct in most regards, something that infuriates Kyle further and solidifies Cartman's delusions.

Because of being spoiled rotten by his single mother he has a ridiculously excessive condition of a superiority complex. He knows in his heart-of-hearts that he is a cruel, overindulged obese beast of a child but it seems no human-discovered method makes him realize it. He constantly denied being fat except when he used his weight to abuse the rights of mobility scooter riders and never seemed to know that just about everyone hates him (no matter how obviously they spelled it out). Cartman's ego makes up preposterous and nonsensical alternatives to things that happen so he always sees himself as an awesome hero everyone loves. This causes him to think he is indeed humble and everyone who challenges this are the ones with ego problems. Unlike the other people of South Park who are fans of the Denver Broncos Cartman is actually a fan of the Oakland Raiders.

There are more episodes focusing on Cartman than any other characters but he is never presented as a hero (at least not one with nothing to repent for). When an episode focuses on him it was usually because he had or was about to have done something terrible for personal gain and others attempted to stop him or resolve it. Even when fighting for what is right he went about it in a morally-dubious way.

Though Cartman seems to have low intelligence in school this could just be a lack of regard for academics. He has demonstrated exceptional cunning for his age in all other situations. He knows how to speak foreign languages and understands enough about economics, politics and religions to manipulate them with little effort. Cartman is also a powerful leader and has easily rallied his classmates and even large groups of adults to follow him in missions. Despite seeming to be rather lazy in most cases Cartman has demonstrated a great passion for acting. When he thought he was of Native American and then African-American heritage he flawlessly took on the stereotypes of both cultures adopting their mannerisms, attires and gestures perfectly. He also shows this talent whilst temporarily acting as a police officer, Hitler, a mentally-handicapped child, a Christian Rock musician and Gandalf the Grey Wizard among many others.

Cartman has the uncanny habits of sneaking into people's houses at night and spontaneously bursting into song to express his deepest feelings. His racism stemmed from an obsessive paranoia that all other groups are equally xenophobic towards the Caucasian race and will attempt an uprising as revenge for years of oppression. Another interesting note about Cartman is him being one of the town's residents with a Southern accent. Due to this he mispronounced several words in some of the show's seasons: "Mom" as "Myem" or "Meeeem", "Guys" as "Geyz", "Hey" as "I" or "A", "Here" as "Myah" or "Nyah" and most words that end in "-ity" as "-itah". A prime example of the final one is Cartman's catchphrase "Respect my authoritah!"

Cartman's sanity and mental state are things of question too. In addition to obviously being near-psychotic Cartman has split personalities. This is demonstrated when doing the voices of his stuffed animals, making them all compliment him immensely but then having one of them insult him. He also thinks his hand-puppet Mitch Conner is another person entirely. Despite doing Conner's voice he seems oblivious to the fact it is just his hand.

There were instances when Cartman's suppressed ethical senses manage to surface such as:

While being simply tendentious in earlier seasons Cartman had gotten considerably worse and even nastier as the show progressed but occasionally became more laid-back and then went to being a villain again. Cartman also cannot seem to make up his mind if he liked Butters, Stan, Kyle and Kenny or not as he said he hates them but occasionally did the opposite and was always hanging out with them, sometimes even singing about it. In addition he usually seems horrified whenever Kenny dies though he later takes advantage. It is important to note that these instances were before Season 5 (and Cartman's breakthrough with Scott Tenorman) and he had attempted since then to both kill his friends and remain indifferent to their well-being overall.

Before the School Daze series, the boys as children tricked a younger Trent Boyett into starting a fire which they believed they could put out with their urine but were unable to, resulting in Trent Boyett getting sent to juvie for 5 years. Years Later, he got out and tried to get revenge, but the boys got him arrested again for causing a similar incident.. Later on, Cartman and his friends teamed up with Spongebob, Patrick, and Finn to compete against Scott Tenorman in a swim race in order to get Patrick out of middle school. They succeeded, however, Scott proceeded to take Patrick hostage and threatened to kill him. That’s when Jesus showed up and took him to hell. After that, He made a few minor appearances in the series.

Prior to the Forever Sophomores series, Cartman was only seen in flashbacks, cameos, or drawings, and never made any physical appearances, though he was mentioned on various occasions.

Cartman made his first physical appearance in the Animas Extravaganza series, where he, along with his friends, finds Luffy, Usopp, and Chopper outside of his house and lets them stay with him until they reunited with the rest of the crew. Later, Willy finds the trio and takes them back to Milford to meet up with the rest of the gang, but not before a battle with Cartman. He doesn't appear in any AE episodes after that. Near the end of the series, they help out Caillou's team by sending Mysterion to send messages to Tom and co, only for Mysterion to be taken down by Tord Larsson and his alliance.

In the Oak House series, during the Hershey Park Arc, he joins the gang as they go on a trip to Pennsylvania. There, they meet up with the Heroes, and together, they go to Gettysburg and Hershey Park before parting ways.

In the Advanced Education series, Cartman and his friends meet up with Willy after they got arrested for being framed for a school shooting. The boys sneak into the school with Willy, and later joins the gang on yet another trip to the movies, where they see "The Grinch", and go out to eat at Not Your Average Joe's afterwards. Later, they join our heroes again, and together, they go to Plimoth Plantation. He has made a few cameos after that.

In the Senior Year series, an alternate version of Cartman appears in "Time Rupture 3: Road to Wampanoag", and he is much thinner. In the timeline, Cartman actually found out who his father was before Mephesto got shot, and has a very close relationship with Scott Tenorman, his step-brother. He is also much kinder then his main counterpart and is even friends with Kyle. He is present when Alex and Rigby visit the McCormick household. In "Wolves", he visits the Connellys household along with this friends to see the Life is Strange 2 finale. In "Critters", he, along with his friends and Randy, team up with our heroes and rescue Sharon and Shelley from the hands of the Woodland Critters. 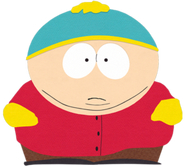 Add a photo to this gallery
Retrieved from "https://school-daze.fandom.com/wiki/Eric_Cartman?oldid=7189"
Community content is available under CC-BY-SA unless otherwise noted.