Phineas and Ferb: The School Daze

Heinz Doofenshmirtz, is a main character who appeared in the Disney series Phineas and Ferb. He was formaerly the main antagonist of this series, always building an Inator to aid him in taking over the Tri-State Area, only to have his plans foiled by his former arch-nemesis Perry the Platypus. The two now work together as secret agents of the O.W.C.A. He serves as the tritagonist of Rise of Bill and the tetartagonist of Cipher's Law.

Doofenshmirtz has fair skin, a D-shaped head, dark blue eyes, a long, pointy nose, and short brown hair. He is 6 feet, 2 inches tall and very slender, but he slouches, which causes him to appear shorter. As a youth he was considerably short for his age. His limbs and fingers are bony and gangly. His legs are usually bent when he stands and walks, and he has a noticeable hunchback.

In Phineas and Ferb, as well as the Cipher's Law Arc and Senior Year, he wears a white lab coat over a black turtleneck sweater, greenish-gray slacks, and black shoes. In O.W.C.A Files, Jimmy Timmy Power Hour 9, Phineas and Ferb: The School Daze, and Off to the Falls, he is seen wearing a brown fedora with a band around it, which used to be yellow when he first joined, but it changed to black after his team's encounter with Professor Parenthesis. While keeping his black turtleneck and shoes from his primary outfit, his green slacks are replaced by a pair of light blue jeans. In Forever Sophomores, he wears a green and dark-gray jacket with this outfit.

Doofenshmirtz is portrayed as a scientific genius but an utterly, incompetent schemer. He is a self-proclaimed, evil mad scientist who despises almost everything around him, including pelicans, ear hair and such obscure things such as musical instruments starting with the letter "B", and otherwise taking unnecessarily large amounts of effort to accomplish menial tasks, finding the simpler ways to be too much of a bother, as he once tried to take Big Ben instead of just go out and buy a wall clock. Doofenshmirtz treats his nemesis Perry the Platypus as his best friend, and is often concerned for Perry when he does not arrive at the scene of his next scheme, hesitating to execute his plans and fearing for where Perry has gone - though he notes that he "hopes something terrible has happened to him." Doofenshmirtz's relationship with Perry has also been used to his advantage, as he once replaced Perry as his nemesis with a secret agent panda bear to cause depression in Perry, causing a distraction from his actual plot to freeze agents to use as a giant chess set. When Perry is re-assigned by the Agency to a higher-leveled threat, The Regurgitator, leaving Doofenshmirtz classified as a low-level threat who would be dealt with by a secret agent snail, Doofenshmirtz himself took up an internship with the new villain to assist him in ultimately defeating the new threat and keeping Perry as his nemesis. He is currently the 2nd fastest cup stacker in the world (only to Candace Flynn). He is also always beaten by a baking soda volcano. As of O.W.C.A Files, Doofenshmirtz is now a secret agent, and is always fighting evil alongside Perry, who he now consisers as his best friend.

In "Phineas and Ferb: The School Daze", Perry and Doof. are battling with Caillou, who was evil at the time, when he forces the two to come to Tom's school to help with MCAS. They later help Tom and co. cure Rigby of his rabid state.

Off to the Falls Edit

1 Year after the Gravity Falls/Phineas and Ferb series ended, Dipper and Mabel meet Phineas and Ferb after Ford takes them to Danville, so he can use their brains to help rescue his brother Stan, who was kidnapped by Caillou. Because their parents are on a trip to Hawaii around the same time, they stay with the Pines twins. As more of their closest friends move in, the gang does many things, such as going to a Murder Mystery play, a Lego Convention, a couple Baseball Games, etc. Meanwhile, Perry is hanging around with Doof and Blendin, going on secret missions or planning to put an end to Caillou's plans. During that time, Perry's cover was accidentally blown by Doofenshmirtz. Eventually, they have a final battle with Caillou and Bill Cipher before parting ways.

2 Years Prior to Forever Sophomores Edit

Not much is known what Doofenshmirtz has been up to during the 2-Year Timeskip, but it is likely that he continued to fight other villians alongside Perry in the O.W.C.A.

2 Years after "Off to the Falls", Dipper and Mabel begin to recall the adventures they had with Phineas and Ferb, and eventually decide to give them a call. They plan to meet up at the Mystery Shack the next day. The Reunion changes from happiness to rage when Caillou joins the party uninvited. Despite his attempts to apologize and warnings about Bill, Phineas, along with the others, are still mad at him and shut him out. Caillou finally earns their trust by performing CPR on Perry after he was knocked out during a battle with Bill and Tord. since then, Phineas and the gang begin to constantly hang out with Caillou and do many fun things together. After Perry became posessed by Bill Cipher, Doofenshmirtz fell into a deep depression over losing his best friend to a supernatural demon. He dealt with this for the rest of the series prior to Perry's rescue in "The Wierdness War".

Doofenshmirtz appeared in a flashback in the Season 4 episode "Andy's Coming Home for Christmas". In Heroes United's Cipher's Law Arc, he goes on a camping trip with Milo's family, and later meets up with Phineas, Ferb, Perry, Dipper, Mabel, Isabella, and Candace, and later Tom and co. He spends the entirety of Spring Break hanging out with our heroes while trying to fight off the infamous Bill Cipher.

Doof was first seen during a flashback in the epsiode "Back Together, Torn Apart”, which takes place shortly after the events of "Endless Summer", where he informs Perry of the devastating news that he was retiring from the OWCA agency, which caused Perry to storm out in despair. After that, he was only either mentioned, seen in a flashback, or appeared in videos from a Minecraft Let's Play series that he and Perry created prior to the Rise of Bill Arc. He later runs into Tom and co. at the movies in "Caillou's Birthday", and later goes to Caillou's house in that same episode to tell Caillou why he really left OWCA. In "Doof Retaliates", He and Perry go out for some coffee, only for Doof to get captured by Doof-2. His past self makes a cameo in "Good Old 2011" and "Fixing the Timeline". He is eventually rescued by Perry and his group in "Time for a Climax", but needed to have his memory erased due to the trauma he recived from getting tortured by Doof-2. In "The Confession", Perry confesses his love to him, and Doof reveals thet he loves Perry back. They presumably become a couple afterwards. 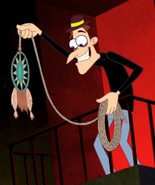 Add a photo to this gallery
Retrieved from "https://school-daze.fandom.com/wiki/Doofenshmirtz?oldid=7524"
Community content is available under CC-BY-SA unless otherwise noted.