Dylan Prescott "Dil" Pickles is a major character in Rugrats and All Grown Up. He is the younger brother of Tommy Pickles and the youngest child of Stu and Didi. He debuts in "An Apologetic Vengeance".

Dil Pickles has grown a lot since the baby we saw for the first time The Rugrats Movie. He is now 12 years old and enjoys wearing strange outfits, talking in code and getting any information he can about alien abductions. His school principal, Mr. Pangborn, thinks that Dil is a bit strange, and he almost goes crazy trying to psychoanalyze what could be wrong with him. Could it be caused by Phil and Lil accidentally dropping Dil on his head when he was a baby? Maybe ... Or maybe Dil is just one of those completely unique people who does not try to be weird ... he just is!

Dil is first seen in the series in the episode "An Apologetic Vengeance", when Phineas, Ferb, Dipper, and Mabel are seen chatting with Tommy on Skype, along with Jimmy Neutron and Timmy Turner, to get advice on whether or not to forgive Caillou for his notorious acts in "Off to the Falls". They suggest that they give him a chance and end the chat from there. As they do this, Dil comes into Tommy's room uninvited, much to his annoyance

In the next Season, Dil joins Tommy and his parents as they head to connecticuit, where they meet up with Caillou's Team and Tom and the gang. They explore connecticuit and play online board games together. While their friends are rehearsing for karaoke, Dil, Tommy, and Caillou work on a video to reunite Stewie and Brian, who had a falling out in "Splitting Up".

Dil has a weird shaped head with fair skin and brown eyes. Like Tommy, Dil is bald in Rugrats, but in All Grown Up, Dil has red hair, which he inherited from his mother Didi. He wears several outfits throughout the 3 programs he appeared in.

In Rugrats, Dil has a small amount of large curly hair on his head. He wore yellow trap-door pajamas with orange trim. In the first 2 movies, his pajamas were purple. In Rugrats Go Wild!, he wore a lavender onesie with green trim and a sailboat on it,

In the All Growed Up special, his hair is now red, just like his mother Didi. He wore a yellow and orange striped long-sleeved shirt, blue shorts, white shocks, and blue and white sneakers.

In All Grown Up!, he starts wearing a hat over his hair, and his outfits change a lot throughout the series, but he is mainly seen in 3 different outfits.

In Forever Sophomores, Dil is now 12 years old and wears an outfit similar to his All Grown Up outfits, but with the colors of his Rugrats outfits. He wears a yellow and orange striped Sherpa hat with a matching vest and finger-less gloves, resembling his onesie from Rugrats, or his striped shirt from All Growed Up. Underneath the vest, he wears a purple t-shirt with an orange border, which is similar to his onesie from the movies. Dil also wears green cargo shorts, his white socks, and blue sneakers with dark red soles and orange laces. 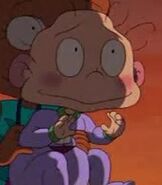 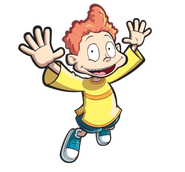 Add a photo to this gallery
Retrieved from "https://school-daze.fandom.com/wiki/Dil?oldid=3071"
Community content is available under CC-BY-SA unless otherwise noted.