David Henry Callahan, is a main character in the show School Daze. He is a friend of Tom from School. Him, Tom, and Willy have been best friends since Pre-School. In Middle School, he wasn’t in any of Tom and the gang’s classes, but they did sit at lunch together. In High School, he’s in their Biology Class. In the Forever Sophomores Series, he is once again not in any of their classes. He appears in almost every episode.

David is very happy and energetic. He is always willing to tell Tom and his friends about his weekend or life stories. As mentioned before, David, Tom, and Willy have been best friends since Pre-School. They hung out together a lot in the 6th grade with Patrick and Richard, who had since left the school for different reasons. Patrick dropped out because Ms. Baker was verbally abusing him, and Richard moved to Virginia. David is shown to be pretty smart. Like, for example, He is good at Biology, unlike Tom and his friends, who aren’t really good at it. Whenever they did a worksheet together, David would be the only one who had the answers. In the 6th grade, he would sometimes get upset, but later on, he was shown to be a bit calmer. David is always willing to hang out with friends, but Tom and the gang wouldn’t be involved as much. That changed in “Weekend at Daniel’s”, when Tom, Willy, Alex, and Rigby went to the movies with Daniel and David. They began hanging outside of school more often, since they don't have any classes together.

David has fair skin, brown eyes, and curly brown hair. He wears a black digital wristwatch on his right wrist. He started wearing glasses in Season 11. His outfits vary throughout the series, but he is mostly seen in 4 outfits.

In the Original Series, He wore an ice blue T-shirt with a grayish-tan hooded vest, dark blue jeans, and dark yellow sneakers. He is also seen wearing these outfits:

In the 8th Grade Adventures series, He started wearing glasses. His new outfit consisted of an orange jacket, a green short-sleeved undershirt, the same dark blue jeans, and white sneakers.

In the Forever Sophomores series, he got yet another new outfit, which consisted of a red hooded jacket, a white short-sleeve undershirt, and blue jeans. He later switches to a dark blue hoodie with a green Under Armor logo on it, along with light gray jeans. His undershirt is still white. Near the end of the series, David wears a light blue t-shirt with a white tank-top underneath, a necklace with a silver tag, and military green cargo shorts. He wore his previous sneakers in Season 28 and most of Season 29, but starting at "Atmospheric Quiz", his sneakers are dark gray with black soles and red accents.

As a child, He wore a green polo shirt, black and gray checkered shorts, and brown sneakers.

David is shown wearing 3 outfits throughout the Forever Sophomores finale. All of the outfits he wore are listed below:

In the Advanced Education series, David can be seen wearing a dark gray t-shirt with scattered white stripes, but keeps his military green cargo shorts and white socks from his previous outfit. His t-shirt and cargo shorts are sometimes seen in different colors. He wore his previous sneakers in his first few appearances in the series, but starting with "Assembled Power-Outage", they were replaced by a lighter gray pair of sneakers with white soles and Nike symbols.

He wears a similar outfit in the promotional artwork, but his t-shirt is red, and his cargo shorts are brown. Also, a blue hoodie is tied around his waist. His socks and sneakers remain the same. His outfit stays the same near the end of the season, but his shorts are gray instead of green. In the Season 1 finale, he wore a light gray hoodie with a dark gray hood and sleeves, his gray shirt underneath, black jeans, and the same sneakers.

In Seasons 2-9, David wears a blue or black hooded jacket over a t-shirt or sweater of varying colors(usually green, blue, black, gray, or other colors), his white undershirt, gray or blue jeans, and the same sneakers. This outfit can be seen in different colors. Near the end of Advanced Education, he would wear a t-shirt with shorts or jeans. He sometimes wears a hoodie with this outfit. His clothing can be seen in the colors blue, red, white, black, green, or gray.

During the Advanced Education finale, David wears 5 different outfits. Each one is listed below:

In the Dog-Daze of Summer series, David wears an aqua-blue t-shirt with a yellow line-like marking on the top right corner. He also wears the same green cargo shorts that he was previously seen wearing at the end of Forever Sophomores and Season 1 of Advanced Education. On his feet, he wears white socks and his light gray sneakers from the Advanced Education series.

David’s main outfit is a dark blue collared jacket over a turquoise t-shirt with black shorts. He would also be seen wearing a t-shirt with cargo or athletic shorts in warm weather and a hoodie or jacket with a long or short-sleeved undershirt and jeans or athletic pants in cold weather. He keeps his gray sneakers from the previous series. His clothing is normally seen in the colors red, blue, black, gray, green, white, or yellow.

David was born on November 21, 2002. He met Tom in preschool, and he became his best friend before Willy. They hung out from Kindergarten all the way to 6th Grade. In 7th and 8th Grade, He wasn't in any of Tom's classes, but they still sat together in lunch. He was in his Biology class in Freshman Year, but when they got into Sophomore Year, David and Tom were once again in separate classes. However, they still had lunch together once every cycle.

David can get along with pretty much anybody, Especially Tom and Willy, who have been his best friends for so many years. 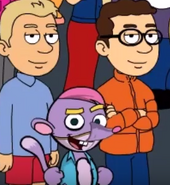 Crossed arms/Standing next to Tico 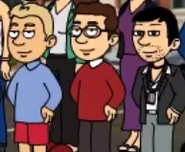 Domenic with Ethan and Brian 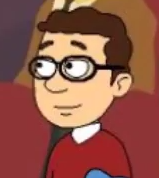 Add a photo to this gallery
Retrieved from "https://school-daze.fandom.com/wiki/David?oldid=7162"
Community content is available under CC-BY-SA unless otherwise noted.