Daniel Tony Lavrich, is a main character in the show School Daze. He is a friend of Tom from School. When he was younger, he was on the swim team with Alex. Like Tom, Daniel would sometimes act as a Voice of Reason when it comes to disputes. He appears in almost every episode.

Daniel is a pretty friendly kid. In earlier episodes, he would often get angry or upset, but later on, he is shown to be very calm. He is a big fan of Five Nights at Freddy’s, Don’t Hug Me, I’m Scared, and SuperMarioLogan. Him, Trent, and Willy would re-enact skits from that stuff using puppet hands. He is shown being the Voice of Reason in a few episodes. He is good friends with pretty much everybody, especially Rick. Daniel hangs out with him a lot, and it would seem like they are best friends, but this is not true. In “Simpsons Guy 3: Disney Edd-venture”, Daniel reveals that he secretly finds Rick annoying. He is also a Boy Scout who would sell popcorn. At some point in Season 18, He reveals that his father is chief of the Police force. In earlier episodes, he used this puppet hand named “Grabber” to try and steal the Utensils, which are secretly alive. Nobody knew until Bernie gave it away in “The School Daze Spooktacular Movie”.

Daniel has fair skin, brown eyes, and brown hair. After Kelly switched Schools, Daniel became the tallest in Tom's group of friends. His outfits vary throughout the series, but he has 9 main outfits.

In the Adventures in South Park series, he was slightly overweight. He had glasses and wore a blue polo shirt with red trim, navy blue shorts, and black shoes.

In the 8th Grade Adventures Series, he wears a blue hoodie with the Fredford High School logo on it, a light blue short-sleeved undershirt, black shorts, white socks and light gray sneakers.

In the High School Years series, he wears a light gray long-sleeved Henley shirt, a puffy dark gray vest, blue jeans, and brown boots, along with other outfits:

In the Forever Sophomores series, he wears a different outfit, consisting of a light gray hoodie with a Superman logo on it(similar to the logo on Tom's shirt), a black and red striped undershirt with long sleeves, red sweatpants, and dark blue Nike sneakers. sometimes, he wears a red or navy blue vest with this outfit. He is also seen wearing other outfits:

Daniel is often seen wearing 2 main outfits after Animas Extravaganza. In the second half of Season 32 and a majority of Season 33, he mostly wore a light blue long-sleeved shirt underneath light gray t-shirt with a Fredford High logo on it. He also wears his dark gray vest from High School Years and light gray sweatpants. In Season 34 and the Rise of Bill Arc, he is seen wearing a dark blue hoodie paired with an orange vest, a blue undershirt, and blue sweatpants. Near the end of the series, he is seen wearing a teal t-shirt(sometimes red, gray, blue, or other colors) with or without a dark blue jacket over it, as well as gray(sometimes black or blue) shorts with teal highlights. He wears his dark blue Nike Sneakers with all 3 of these outfits.

When the class photo was taken prior to the Forever Sophomores finale, He wore a blue t-shirt paired with a red vest, along with the same blue sweatpants from Seasons 35-36, and his blue hoodie is tied around his waist. On his feet, he wore his dark blue Nike sneakers.

Daniel's outfit during "The Weirdness War" consists of a light blue t-shirt, darker blue shorts with red at the top, dark gray socks, and his dark blue Nike sneakers.

In the Advanced Education series, Daniel is seen wearing a turquoise t-shirt with dark gray short sleeves, gray shorts, white socks, and gray sneakers with turquoise trim and black Nike symbols. His t-shirt and shorts are often seen in different colors. In the promotional artwork and the first intro, he wore a green t-shirt paired with a navy blue vest, the same gray shorts and socks, and his sneakers are red with white trim. Near the end of Season 1, Daniel wore a gray long-sleeved shirt with navy blue trim and the letter F on it(which stands for Fredford), the same gray sweatpants from Post-Animas Extravaganza, and blue sneakers with acid-yellow accents.

In Season 2-9, Daniel primarily wears a gray long-sleeved shirt paired with a maroon vest and a matching pair of maroon sweatpants. This outfit appears to be a combination of his High School Years and Forever Sophomores outfits. The vest and pants are sometimes seen in the colors black, red, blue, green, or other colors, and his shirt is sometimes colored orange, blue, maroon, black, or other colors. He would occasionally wear a collared sweater or a hoodie over the shirt. He kept his gray sneakers for most of the series, but starting with the 44th Season, his sneakers are maroon with black laces, white soles, and orange Nike symbols.

In Season 10 of Advanced Education, Daniel's usual clothing consists of a t-shirt of varying colors(usually red, teal, blue, gray, black, or other colors), along with athletic shorts or sweatpants(colored black, gray, or blue), and his usual sneakers. Sometimes, he wears a hoodie or vest with this outfit.

During the Advanced Education finale, Daniel wears 5 different outfits. Each one is listed below:

In the Dog-Daze of Summer series, Daniel wears a dark blue hoodie with a white circular symbol on the top-right corner. Underneath, he wears a light gray t-shirt with black scattered stripes and a dark blue Patriots logo in the middle, along with dark blue athletic pants. On his feet, he wears the same maroon sneakers from his previous outfit.

In Senior Year, Daniel’s main outfit consists of a salmon-colored Henley shirt with short sleeves, gray bermuda shorts, and gray slip-on shoes with white soles. He would also be seen wearing a short-sleeved t-shirt(sometimes long-sleeved) with or without a vest or hoodie(sometimes both) over it. He will either wear shorts or sweatpants for legwear, and gray Nike sneakers(sometimes his old maroon ones) on his feet. Sometimes, he wears a quarter-zip pullover or collared jacket instead of a hoodie and/or vest. His clothing is normally seen in the colors blue, gray, maroon, white, orange, black, red, or green.

Daniel was born on May 1st, 2002 in Boston Massachusetts it Brigham and Women's Hospital. He was delivered at 10:02am on MayDay. His Mother had went in labor at Shady Lane, which is located in Fredford, and it went from 6am to 10:02am. He also has a sister named Delila (who is now nicknamed Lila), who was born on March 21, 2003. At age 4, The Lavriches moved to 7 Campanology Lane. It is unknown where they lived before the move. He began attending Pampton where he met Aaron Oderk, who eventually became his best friend. He attended Pampton from Kindergarten to 3rd Grade. In 4th Grade, Daniel switched to Johnson Elementary after the school officials discovered that he was a "special" child. During his time in Johnson Elementary, Daniel constantly got upset and verbally abused other students. That changed as soon as he got into Middle School. In Middle School, he was much calmer, he was getting along with everybody, especially Tom, Trent, and Willy, who he now considers his best friends. He is currently getting his education at Fredford High School. He was in their Algebra, Biology, and Essentials to Literacy classes in High School Years. He was in their Essentials to Literacy class and Advisory in Forever Sophomores. In Advanced Education, However, like most of Tom's friends, he is in none of his classes, so he isn't seen much in the series. This is where they start hanging out outside of school. In Senior Year, he is in their Transitions, Academic Support, and Algebra II classes.

Daniel can get along with pretty much anybody, except for people who annoy or insult him or his friends. 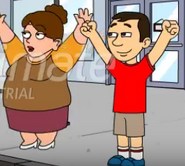 Daniel at the movies 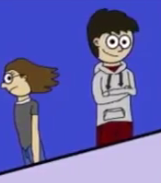 Add a photo to this gallery
Retrieved from "https://school-daze.fandom.com/wiki/Daniel?oldid=7755"
Community content is available under CC-BY-SA unless otherwise noted.